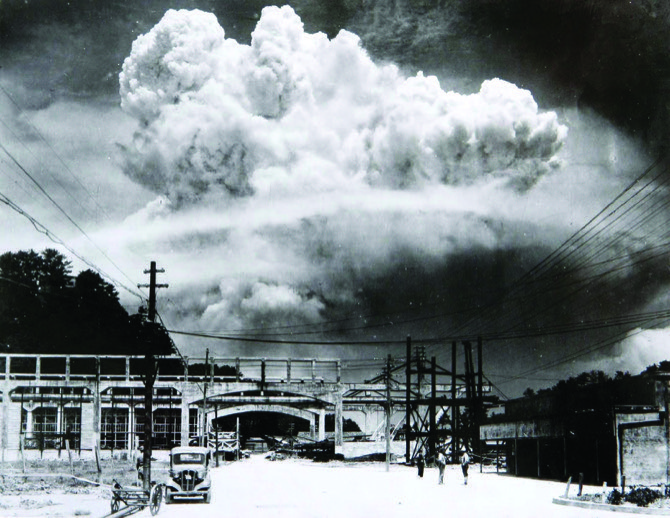 American forces have dropped an atomic bomb on Nagasaki – the second such attack on Japan in three days.

The bomb was dropped by parachute from an American B29 Bomber at 1102 local time.

It exploded about 1,625 ft (500m) above the ground and is believed to have completely destroyed the city, which is situated on the western side of the Japanese island of Kyushu.

In a statement issued from Guam, General Carl A Spaatz, Commander of the US Strategic Air Forces in the Pacific, said: “The second use of the atomic bomb occurred at noon, August 9, at Nagasaki.

“Crew members report good results. No further details will be available until the mission returns.”

American airmen flying many miles from Nagasaki have said smoke from fires in the city was rising 50,000ft (15,240m).

Nagasaki is one of Japan’s most important ports providing vital access to and from Shanghai.

Three days ago a similar device was dropped on the city of Hiroshima on Japan’s largest island, Honshu.

The extent of the damage caused to Hiroshima is not yet known but Japanese broadcasts indicate that “enormous devastation” has been done.

No reaction to the Nagasaki attack has yet been given by Japan but pressure is growing on the country to surrender. Yesterday the USSR joined forces with the allies and declared war on Japan.

The Americans have also warned the Japanese people that further attacks of a similar nature will be made unless they petition their emperor to surrender.

More than three million leaflets were dropped over the country today from American aeroplanes warning the Japanese people that more atomic weapons would be used “again and again” to destroy the country unless they ended the war forthwith.

About 30% of Nagasaki, including almost all the industrial district was destroyed by the bomb and nearly 74,000 were killed and a similar number injured.

The attacks on Hiroshima and Nagasaki were the first time atomic bombs had been used in warfare.

Residents of both cities are still suffering the physical and mental consequences of radiation to this day.

On 14 August Japan surrendered to the Allies.