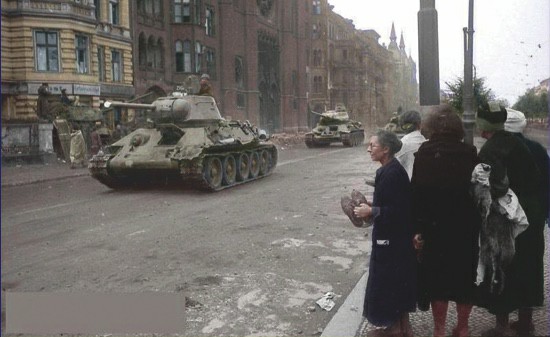 Russian troops have captured some outlying suburbs of Berlin at the beginning of what promises to be a bitter battle for control of the city.
The Red Army approached the German capital from three directions, north, east and south-east. The northeastern suburb of Weissensee is the closest to the centre being only three miles away.
The Nazi minister of propaganda, Josef Goebbels, has issued a statement saying Berlin will be defended to the last.
He said anyone who showed cowardice, hoisted the white flag or attempted sabotage would be treated as outlaws.
The Germans are understood to be terrified of what might happen to them if Berlin falls into Soviet hands. Since 1941 Nazi forces have laid waste to large parts of the Soviet Union.
The Soviet troops under Marshal Georgi Zhukov are pushing towards Berlin from the north and east and Marshal Ivan Konev and his forces from the south. They are both keen to achieve the honour of capturing Berlin, the heart of the Nazi movement.
American forces are also pushing towards Berlin from the west and are now said to be only hours away from joining up with Russian troops.
Reports from Berlin say shells have begun to fall in the centre of the city. Correspondents say they have been fired from southern positions taking the Germans by surprise. They had been expecting Marshal Konev’s forces to press on towards Prague and Dresden.
The Russian advance has been supported by its air force. Although the weather has been poor it has not stopped its low-level attack aircraft, the Stormoviks, sweeping the enemy lines and the improved Soviet dive-bombers are also halting counter-attacks.
The final assault on Berlin began on the night of 15/16 April when Soviet forces launched a powerful artillery barrage against the German forces dug in west of the Oder River and to the east of the city in an area known as the Seelow Heights.
A German military spokesman said they were attacking under what he called a permanent “air umbrella” with “fresh Soviet troops coming forward as though on a conveyor belt.”
After two days of fighting and failing to make any significant breakthrough at Seelow, however, Marshal Konev’s forces were ordered south and Marshal Zhukov’s to the north thus bypassing the German 9th Army at Seelow and surrounding Berlin.
Hitler is reported to have celebrated his birthday yesterday in his underground bunker in the city, cut off from the reality of the fighting above his head.
Reports say Marshal Konev’s forces to the south of Berlin have taken more than 10,000 prisoners in the past four days. They also claim to have captured 96 aircraft and more than 150 tanks and self-propelled guns.
Marshal Zhukov’s troops, heading from the north and east, claim to have taken more than 13,000 prisoners. They have captured 60 aircraft and more than 100 tanks and self-propelled guns.
But in their haste to capture Berlin many Soviet soldiers have also been killed and tanks lost.

Hitler ordered a counter attack. But the Wehrmacht’s 9th Army was cut off by Marshall Konev’s forces in the forest south of Berlin, near the small town of Halbe.
Over 50,000 soldiers and civilians died. Their bodies were left piled high beside the narrow paths in the forest.
The Red Army meanwhile pressed on into the heart of Berlin. Zhukov’s and Konev’s troops were still racing to be first to capture the city and in their haste many lives appear to have been needlessly lost.
Figures vary but one source says the battle for Berlin cost the Red Army some 70,000 troops.
Hitler and his mistress Eva Braun committed suicide in his bunker on 30 April only hours after they were married.