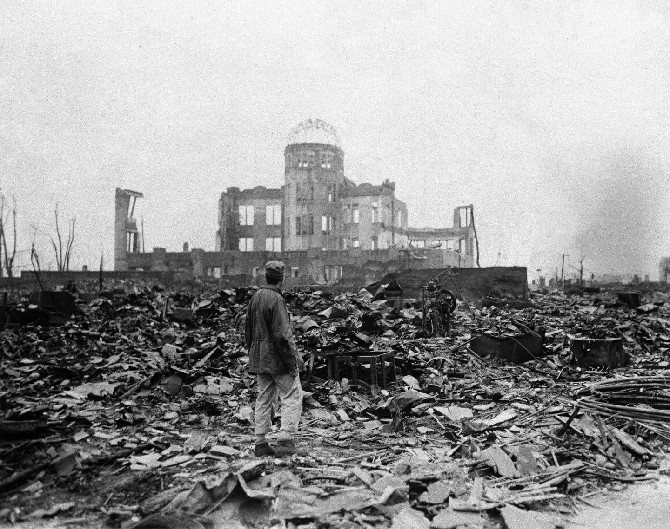 The first atomic bomb has been dropped by a United States aircraft on the Japanese city of Hiroshima.
President Harry S Truman, announcing the news from the cruiser, USS Augusta, in the mid-Atlantic, said the device was more than 2,000 times more powerful than the largest bomb used to date.
An accurate assessment of the damage caused has so far been impossible due to a huge cloud of impenetrable dust covering the target. Hiroshima is one of the chief supply depots for the Japanese army.
The bomb was dropped from an American B-29 Superfortress, known as Enola Gay, at 0815 local time. The plane’s crew say they saw a column of smoke rising and intense fires springing up.
The President said the atomic bomb heralded the “harnessing of the basic power of the universe”. It also marked a victory over the Germans in the race to be first to develop a weapon using atomic energy.
President Truman went on to warn the Japanese the Allies would completely destroy their capacity to make war.
The Potsdam declaration issued 10 days ago, which called for the unconditional surrender of Japan, was a last chance for the country to avoid utter destruction, the President said.
“If they do not now accept our terms they may expect a rain of ruin from the air the like of which has never been seen on Earth. Behind this air attack will follow by sea and land forces in such number and power as they have not yet seen, but with fighting skill of which they are already aware.”
The British Prime Minister Clement Attlee, who has replaced Winston Churchill at Number 10, read out a statement prepared by his predecessor to MPs in the Commons.
It said the atomic project had such great potential the government felt it was right to pursue the research and to pool information with atomic scientists in the US.
As Britain was considered within easy reach of Germany and its bombers, the decision was made to set up the bomb-making plants in the US.
The statement continued: “By God’s mercy, Britain and American science outpaced all German efforts. These were on a considerable scale, but far behind. The possession of these powers by the Germans at any time might have altered the result of the war.”
Mr Churchill’s statement said considerable efforts had been made to disrupt German progress – including attacks on plants making constituent parts of the bomb.
He ended: “We must indeed pray that these awful agencies will be made to conduce peace among the nations and that instead of wreaking measureless havoc upon the entire globe they become a perennial fountain of world prosperity.”

The Hiroshima bomb, known as “Little Boy” – a reference to former President Roosevelt, contained the equivalent of between 12 and 15,000 tons of TNT and devastated an area of five square miles (13 square kilometres). More than 60% of the buildings in the city were destroyed.
Official Japanese figures at the time put the death toll at 118,661 civilians. But later estimates suggest the final toll was about 140,000, of Hiroshima’s 350,000 population, including military personnel and those who died later from radiation. Many have also suffered long-term sickness and disability.