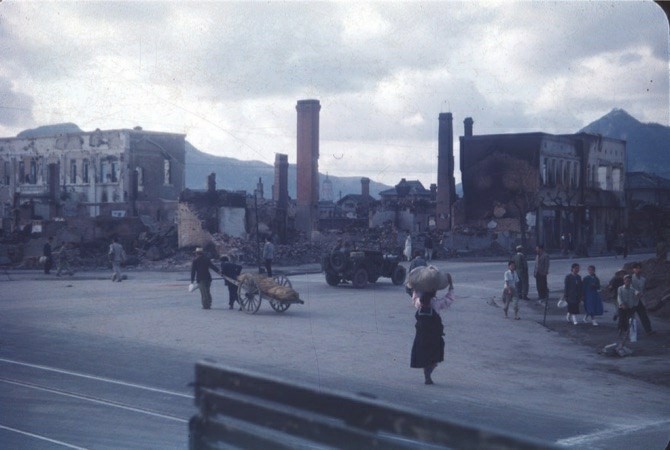 United Nations forces have taken control of the South Korean capital Seoul, three months after it fell to North Korea, the US Army has announced.
The US 7th Infantry Division and South Korean 17th Regiment have crossed the Han river and captured the North Korean stronghold on South Mountain, the spokesman said.
US Marines have also reached Duk Soo palace in the centre of the city and are within 600m (1,969ft) of the main railway station.
North Koreans strongly resisted the UN advance near the station and American and South Korean units suffered many casualties, but opposition in other areas is reported to have been light.
US Air Force planes from the American aircraft carrier Sicily supported the ground attacks all day, targeting North Korean defences with jellied petrol bombs and rockets.
Major General Edward Almond, commander of the X Army Corps, told reporters the combined assault had been key to the UN’s success.
The general said: “Co-ordination of air, tank and artillery, and infantry fire-power made possible the seizure of the enemy’s defences with minimum losses.”
He added that the UN advance from the west after the landings at Inchon on 15 September had cut off important North Korean supply routes and forced them to retreat.
North Korea’s defences were crucially breached when tanks from the American 1st Cavalry Division, which had entered Seoul from the west, linked up with US infantry who had fought their way from the east.
The troops joined forces at the 274m (900ft) South Mountain after it was captured in a surprise attack.
The North Korean Peoples’ Army have been in control of Seoul since 26 June, just 24 hours after they invaded South Korea.
The UN condemned the offensive and US troops arrived to bolster South Korean resistance just days later.

Korea was divided after the Japanese withdrawal at the end of World War II – which left the USSR occupying the north of the country and the US the south. The border was the 38th parallel.
The invasion of South Korea took the international community largely by surprise – despite years of increasingly bloody frontier incidents.
The re-capture of Seoul from the North Koreans did not signal the end of the conflict and in November 1950 troops from Communist China entered a war which would eventually cost two million lives.
Fighting in Korea did not stop until the signing of an armistice on 27 July 1953.
But a peace deal has never been reached and American troops remain stationed in the de-militarized zone between North and South Korea.