This Day in History | 1951 Designers prepare to dazzle Venice 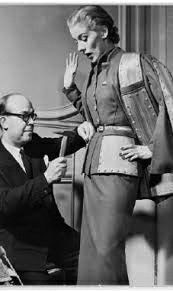 British fashion designers have revealed the collection they plan to send to Venice later this week as part of the city’s Biennale arts festival.
Last week, they showed off an array of 40 ladies’ outfits at a London restaurant before packing them up for the Venice show.
The collection aims to demonstrate the versatility of the three most favoured textiles of the year – cotton, rayon and wool.
The models and their mannequins will be flown to Italy this week by the “big ten” members of the Incorporated Society of London Fashion Designers for the Venice festival of arts and costume.
One of the evening gowns on show was of a simple but elegant design with a full skirt in checked gingham in four colours with a strapless bodice in velvet.
Another more elaborate evening dress was made of white gossamer wool with a neckline and stole embroidered in sequins.
Among the collection were more traditional tailored suits but in striking colours such as red and scarlet.
The most glamorous gown was a full-skirted wedding dress in delicate white print on pink organdie.
As well as heralding the latest fashions from around the world Venice plans to celebrate the history of clothing with a special exhibition called Costume through the Ages.
It opened today at the International Centre of Arts and Costume at the Palazzo Grassi and includes a selection of rare books illustrating the history of costume.
Also in association with the Venice Biennale there will be a Festival of Fashion and Costume in Film Production.

British fashion in 1951 was emerging from the austere war years and designers could afford to experiment with new fabrics and styles.
London now holds its own London Fashion Week organised by the British Fashion Council set up in 1983 and showcases new and established British designers.
The Venice Biennale international art exhibition was first held in 1895.
It was expanded to include more avant-garde artists in the early 1900s. Cities around the world with their own version of the Biennale include Sao Paolo, Paris, Tehran and Tokyo.
The Venice festival closed in 1974 after accusations that it was too elite and a waste of taxpayers’ money but then re-emerged when organisers focussed on social realism and environmental issues.