This day in history | 1952 Anne Frank published in English 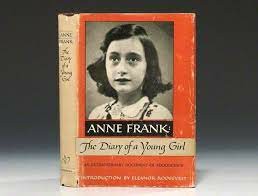 The moving diary of Anne Frank, a Jewish victim of the Holocaust, is now available in British book shops entitled The Diary of a Young Girl.
The book was first published in Dutch in 1947 under the title Het Achterhuis (The Secret House) by her father Otto Frank, who survived the concentration camps.
It is a lively and at the same time disturbing account of a teenager living in hiding with seven others in fear of their lives in occupied Holland.
Anne died just before her 16th birthday in the Bergen-Belsen concentration camp in 1945.
Her father survived and returned to Amsterdam where he, his family and friends had been in hiding for two years before the Nazis found them.
There, his Dutch friends gave him papers left behind after the Gestapo raid. Among them was his daughter’s diary.
It was some days before he could bring himself to read it and when he did he was astonished to find out about a side of his daughter he never knew – someone who was wise beyond her years and had a deep faith in humanity in spite of her suffering.
Her entry for 12 July 1944, three weeks before her arrest, read: “I hear the approaching thunder that, one day, will destroy us … I feel the suffering of millions. And yet, when I look up into the sky, I somehow feel that everything will change for the better, that this cruelty too will end, that peace and tranquillity will return once more.”
The Franks had moved to Holland from Nazi Germany in 1933. In July 1942, after the Germans had occupied the country, the Franks and four other Jewish people went into hiding in an annex of a house in central Amsterdam.
That year, Anne, who had an ambition to be a writer, was given a red and white check diary for her 13th birthday and immediately started writing about her experiences.
The annex was raided by the Gestapo on the 4 August 1944 after a tip-off from a Dutch informer and the eight occupants sent to Westerbork, a transit camp in Holland, and then on to Auschwitz and Bergen-Belsen.
Anne died weeks before the liberation of Bergen-Belsen as did her mother, Edith, and sister, Margot.

Anne Frank became a symbol of Jewish suffering under the Nazis.
Her diary, later entitled The Diary of Anne Frank, was translated into 50 languages and became one of the most popular books in the world.
It was made into a play in 1956 that won the Pulitzer Prize and into a film three years later.
An unexpurgated edition was published in English in 1995 revealing both Anne’s awakening sexuality and her criticism of some of the adults in hiding with her.
The apartment in Amsterdam where the family hid, Number 263 Prinsengracht, is now the Anne Frank museum.