This day in history | 1954 US tests hydrogen bomb in Bikini 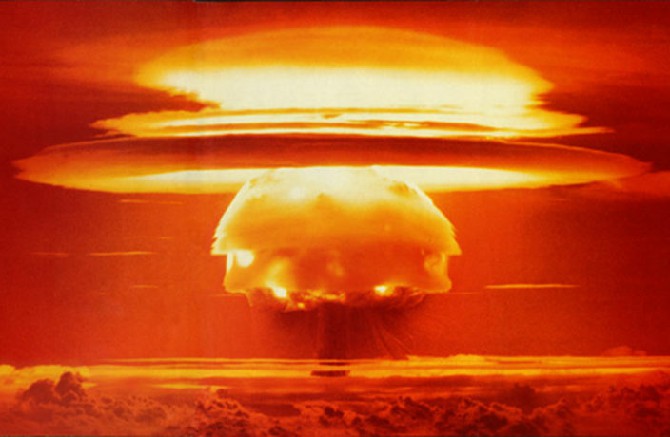 The US has produced the biggest ever man-made explosion so far in the Pacific archipelago of Bikini, part of the Marshall Islands.
It is believed the hydrogen bomb was up to 1,000 times more powerful than the atomic bomb that destroyed Hiroshima.
It was so violent that it overwhelmed the measuring instruments, indicating that the bomb was much more powerful than scientists had anticipated.
The 15 megaton bomb delivered a force far more powerful than expected.
One of the atolls has been totally vaporised, disappearing into a gigantic mushroom cloud that spread at least 100 miles wide and dropping back to the sea in the form of radioactive fall-out.
The Atomic Energy Commission announced this was the first in a series of tests to be carried out in the area.
Tests first began in Bikini in 1946 after the natives were moved to the island of Rongerik, then to Ujelan a year later and to Kili in 1949.
This is the second H-bomb test in the area.
A 10.4 megaton bomb was exploded on 1 November 1952 at Enewatak, west of Bikini.
It destroyed one island and left a crater 175 feet deep.
It was hundreds of times more powerful than that used over Hiroshima.
Unlike that device which tapped energy by splitting atomic nuclei, the Enewetak weapon forced together nuclei of hydrogen to unleash an even greater destructive force.

The 1954 Bikini bomb was the biggest man-made explosion until the USSR’s 50-megaton test in 1961.
Three weeks after the Bikini bomb it emerged that a Japanese fishing boat, called Lucky Dragon, was within 80 miles (129 km) of the test zone at the time. Its 23 crew were severely affected by radiation sickness.
They were among 264 people accidentally exposed to radiation because the explosion and fall-out had been far greater than expected.
The original natives were granted $325,000 in compensation and returned to Bikini in 1974. But they were evacuated four years later when new tests showed high levels of residual radioactivity in the region.
Twenty-three nuclear tests were carried out at Bikini between 1946 and 1958.