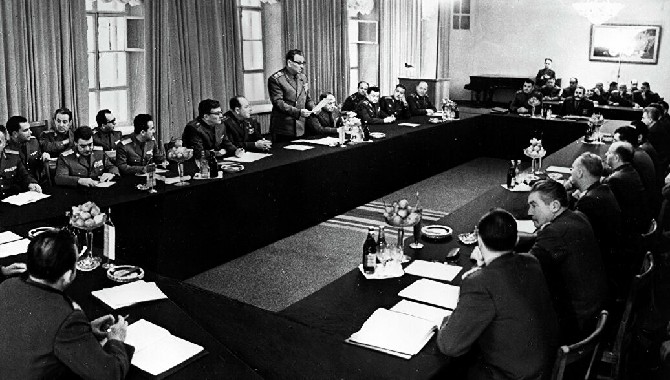 The Soviet Union and its Eastern Bloc allies have signed a security pact in the Polish capital, Warsaw, after a three-day conference.
Announcements in Warsaw and Moscow said the Soviet Prime Minister, Marshal Nikolai Aleksandrovich Bulganin, and leaders of seven other countries approved the draft of a new mutual aid agreement called the Warsaw Treaty of Friendship, Co-operation, and Mutual Assistance.
It is designed, among other things, to ensure close integration of military, economic and cultural policy between eight Communist nations.
Signatories to the treaty – the USSR, Poland, East Germany, Czechoslovakia, Hungary, Romania, Bulgaria and Albania – have agreed to unify their forces under one command although at this stage it is not known who will take this post.
Yugoslavia, the only European Communist state not included in the pact, was expelled in 1948 from Cominform, the Communist information agency for refusing to acknowledge Soviet supremacy.
The treaty, signed at the Warsaw Palace, comes in the wake of news that West Germany has been accepted by western nations into Nato (North Atlantic Treaty Organisation) following talks earlier this month in Paris.
In a speech at the beginning of the Warsaw talks, Marshal Bulganin warned that the USA, Britain and France were turning West Germany into “the principal hotbed of the danger of war in Europe” by allowing it to re-arm.
He said allowing West Germany into Nato was “the major obstacle” to reunification of Germany.
Existing bilateral agreements between nations of the Eastern Bloc, he stated, were no longer sufficient to ensure their security and this Warsaw Pact would supersede all of those.
He added that Nato was also encouraging countries in the Near and Middle East to form military blocs to plan attacks on the Soviet Union and its allies.
In his concluding speech today, Marshal Bulganin emphasised the pact was inspired by the Leninist principle of peaceful co-existence between democratic nations and said they wanted to abide by the United Nations Charter.
However the Times newspaper editorial today points out that unifying the armies of all eight countries will also allow the USSR to base its own troops in member states and “would certainly help to keep the satellites in order”.

Warsaw Pact countries placed their forces under the command of Marshal Ivan Stepanovich Koniev.
The Warsaw Pact did allow the USSR to suppress nationalist rebellions. Its troops crushed uprisings in Hungary in 1956 and Czechoslovakia in 1968 which prompted Albania to withdraw from the pact later that year.
The democratic revolutions of 1989 in eastern Europe heralded the end of the Warsaw Pact and the Cold War between east and west.
East Germany withdrew in 1990 and on July 1 1991 at a final summit meeting of Warsaw Pact leaders in Prague, Czechoslovakia, it was declared “non-existent”.