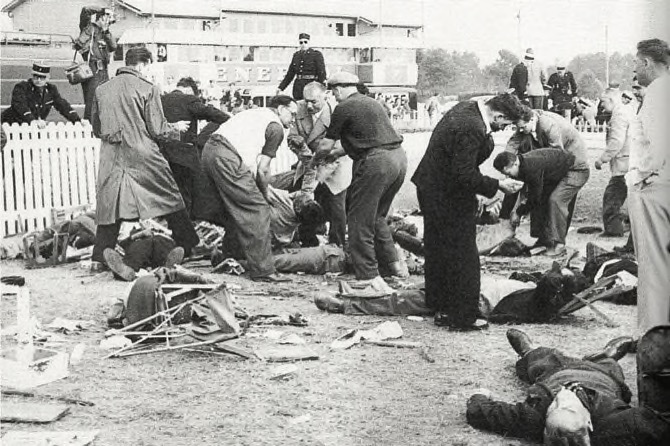 Seventy-seven people have been killed and 77 others injured when two cars collided on the race track and crashed into the spectators’ stand at Le Mans in north-west France.

The Mercedes-Benz being driven by Pierre Levegh hit the bank by the grandstand and immediately exploded. Parts of the wreckage were blown into the enclosure, killing scores of mostly-French spectators.

The accident happened about two hours after the 24-hour race began at the Le Mans circuit. There was no official announcement of the disaster and the race was allowed to continue.

Pierre Levegh was speeding down the straight in front of the pits when he clipped the Austin-Healey driven by British driver Lance Macklin.

The Mercedes, which was travelling at over 150mph (240khm), flipped over and flew through the air and hit the bank by the spectator enclosure.

Levegh was killed outright. Macklin’s car spun wildly before coming to rest in the middle of the track, but he was unhurt.

The race had promised to be one of the fastest and most keenly contested ever held at Le Mans.

The three teams competing were Ferrari, Jaguar and Mercedes-Benz. Shortly after the crash the Mercedes manager instructed the two remaining Mercedes to withdraw from the race as a mark of respect to those killed in the disaster.

It was several hours before spectators on the far side of the track knew of the crash. The first sign something was wrong was when the Mercedes team pulled out.

The British consulate in Paris has confirmed there were two British victims among the dead.

Jack Diamond, aged 24, from London and Robert Loxley, of Worcester, who according to French official records was celebrating his 24th birthday.

This is the biggest disaster at a motor racing circuit.

Previously, 13 people were killed and 27 injured at Weyberg in Germany when a German car left the track during a race.

The number of those who died in the Le Mans tragedy rose to at least 80.

Officials pointed out that security measures at Le Mans went beyond standard requirements.

There was some criticism of the decision to complete the race, but the organisers claimed stopping the race would have alarmed spectators and hampered rescue efforts.

The race was won by the British Jaguar team, drivers Ivor Bueb and Mike Hawthorn who reached a record average speed of 106 miles an hour (170.5 kmh).

The French cabinet concluded race security should be further improved and the distance between the track and spectators increased.

Mercedes-Benz withdrew from all motor racing at the end of the 1955 season and did not return until 1987.

Switzerland banned all racing on motor circuits following the tragedy, a ban that was only lifted in June 2007.