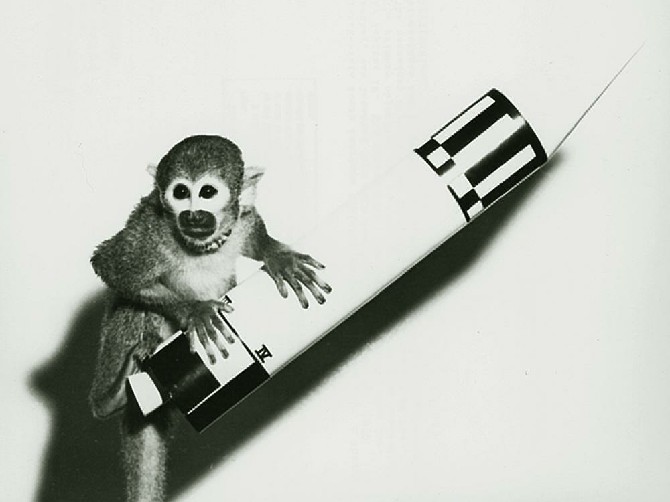 Two monkeys have become the first living creatures to survive a space flight.
Able, a seven-pound female rhesus monkey, and Baker, a one-pound female squirrel monkey, were fired 300 miles into space in the nose-cone of a Jupiter missile AM-18 from Cape Canaveral in Florida.
The flight, which reached speeds of up to 10,000 mph,(16,090kmh) lasted 15 minutes and the monkeys were recovered 1,500 miles (2,413km) away in the South Atlantic near Puerto Rico.
The pair, who were weightless for nine minutes, were monitored throughout the flight for changes in their heart beats, muscular reaction, pulse velocity, body temperature and rate of breathing.
A spokesman from the Medical Research and Development Command of the US Army said the monkeys were in “perfect condition” on their return. Data recorded throughout the flight will be analysed over the next two weeks.
Although regarded as a success by space experts, the mission has been heavily criticised by animal welfare groups.
The American Embassy in London received protests from the League Against Cruel Sports and the Conference of Anti-Vivisection Societies, which is made up of 29 animal welfare groups.
A statement from the League Against Cruel Sports read: “Such action as this falls within the category of scientific devilry rather than scientific research.”
It added: “In the name of humanity we beg of you to drop these vile experiments.”
The statement from the Conference of Anti-Vivisection Societies had the same tone. It read: “Cowardly acts such as this can never be justified on the grounds of expediency and all thinking people will be disgusted to learn of this latest misuse by scientists of defenceless animals.”
Able and Baker are due to return to Washington from Puerto Rico in a military transport aircraft.

Able died from the effects of anesthesia given for removal of electrodes implanted for the historic mission.
A subsequent post mortem examination revealed she had suffered no adverse effects from her flight into space.
Baker survived a similar operation and lived until 1984.
Able and Baker were not the first animals sent into space. On 3 November 1957 the Russians sent a dog Laika, which was mostly Siberian husky, into orbit. But days into the flight the dog died.
Between 1957 and 1961 13 dogs were sent into space by the Russians, five of whom died.
On 13 December 1958 the Americans sent the first animal, a squirrel monkey named Gordo, into space aboard a Jupiter AM-13 booster rocket. The monkey survived the flight but after landing a flotation device in the nose cone failed and Gordo died.
On 18 October 1963 the first cat, Felix, was sent into space by the French and survived.
Since then animals including frogs, fish, crickets and even worms have been sent into space.