This Day in History | 1966 – Football glory for England 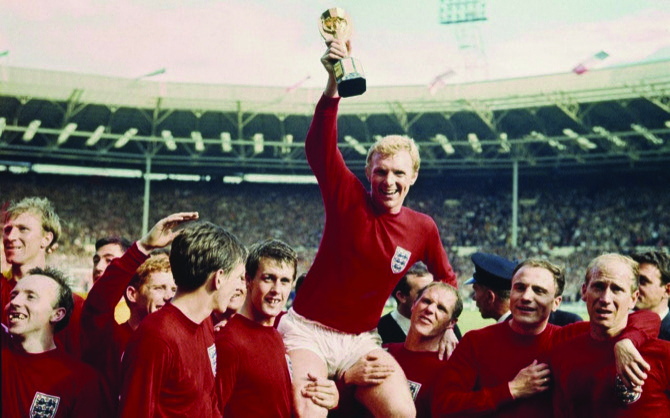 England have won football’s World Cup for the first time since the tournament began in 1930.

A crowd of 93,000 spectators – including the Queen and Prince Phillip – filled London’s Wembley Stadium to watch the host nation play West Germany in the final game of the 1966 championships.

Another 400 million people around the world watched the keenly fought match on television.

In the final moments of extra time Geoff Hurst powered home his third goal to give England a 4-2 victory and to become the first man ever to score a hat-trick in a World Cup final.

After Germany had taken an early lead, Hurst levelled the score for England by half time with a header from a free kick taken by captain Bobby Moore.

England came out with courage and determination after the break and glimpsed glory thirteen minutes from time as Martin Peters took their second goal.

But a free kick to Germany 15 seconds from full time gave Wolfgang Weber a close-range shot into Gordon Banks’ goal and took the score to 2-2.

In the crucial minutes before the decisive half hour of extra time England manager Alf Ramsey was heard to rally his team, saying: “All right. You let it slip. Now start again.”

A dubious goal by Hurst – glanced off the line by Weber and only given after consultation between the Swiss referee and Soviet linesman – put England ahead in the last 15 minutes, before the striker’s third goal put the game out of Germany’s reach.

Bobby Moore went up to the royal box to collect the solid gold Jules Rimet trophy from Queen Elizabeth.

In the largest World Cup ever – numbering 70 countries – England were among the favourites and got as far as the semi-final, against newcomers Portugal, before conceding a goal.

Geoff Hurst’s second goal and the decision of referee Gottfried Dienst have continued to be controversial.

But photographic technology has so far been unable to offer decisive evidence about whether or not the ball crossed the goal-line and Hurst remains the only player to score a hat-trick in the World Cup finals.

England have failed to reach the World Cup final since 1966 and did not even qualify for the last rounds of the tournament in the US in 1994.

Germany went on to compete in five more finals. The nation have won the championships three times, against Hungary in 1954, Holland in 1974 and Argentina in 1990.