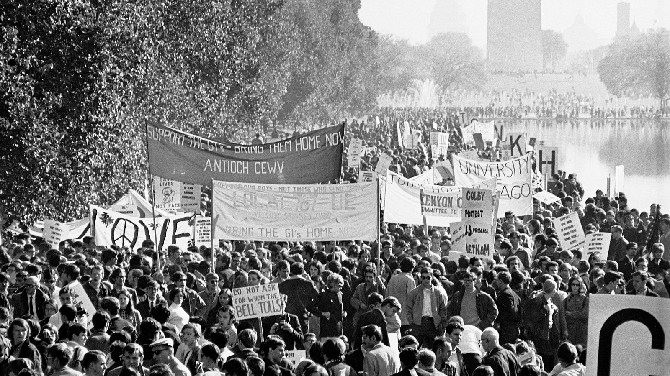 The biggest demonstration yet against American involvement in the Vietnam War has taken place in the town of Oakland, in California.
An estimated 4,000 people poured onto the streets to demonstrate in a fifth day of massive protests against the conscription of soldiers to serve in the war.
The city was brought to a standstill as protesters built barricades across roads to prevent buses carrying recruits to the Army’s conscription centre.
Police reinforcements came in from San Francisco as the protests turned violent.
Demonstrators, many wearing helmets and holding plywood shields, overturned cars and threw bottles, tin cans and stones at the police.
Four people were injured and seven arrested.
There was no repeat of the scenes three days ago, however, when police in Oakland used clubs and chemical sprays to clear the streets.
The heavy-handed treatment of demonstrators caused outrage throughout the country.
Today’s demonstration was part of what is being called “Stop the Draft Week” – a nationwide initiative which has seen peace marches in cities across the United States.
It is expected to move to Washington DC tomorrow, and demonstrators are said to be targeting all roads to the capital.
It is thought up to 40,000 could join a protest march from the Lincoln Memorial to the Pentagon.
The demonstrators are trying to disrupt military induction centres, encouraging large numbers of young men to turn in their draft cards.
Many are burning the cards – an illegal act under a law passed by Congress two years ago.
About 50 conscientious objectors have already been sent to jail for their protest.
It is estimated up to 7,000 have left the country, mainly to Canada, to avoid the draft.
Recent polls suggest that American support for the war in Vietnam is declining steadily.
President Johnson is under attack from those who believe he is not being aggressive enough on Vietnam as well as those who think he should withdraw.
A Gallup poll published earlier this month showed his popularity rating plummeting to the point where if an election were held at this point in his term of office, he would lose by a landslide.

The anti-war movement grew from strength to strength, until in March 1968 President Johnson announced a pause in the bombing of North Vietnam to start negotiations for peace.
At the same time, he announced he would not be standing for re-election as President.
He left office in 1968, while the war was still at its height.
Lyndon Johnson continued to be closely involved in negotiations for peace in Vietnam, in an initiative which culminated in the Paris Peace Accords of 1973.
He did not live to see the treaty signed. Five days before, on 22 January 1973, he died suddenly of a heart attack at his Texas ranch.
The hated draft ended in the same year, and America converted to an “all-volunteer military”.
Despite the Accords, the fighting in Vietnam continued until the Saigon government surrendered to the Vietcong in April 1975.