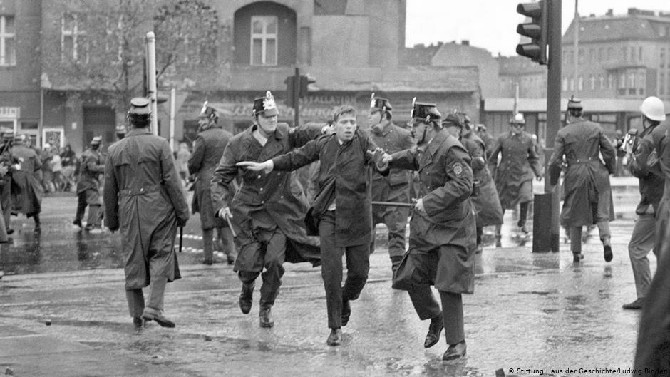 A massive student rally in West Berlin has ended in violent clashes between police and protesters.
Students blocked the city’s main thoroughfare, the Kurfurstendamm, in protest at the shooting last week of one of their leaders, Rudi Dutschke.
Mr Dutschke was shot three times outside the offices of the German Socialist Students Federation (SDS).
He is still seriously ill in hospital.
Students chanted Mr Dutschke’s name interspersed with shouts of “Murderer Springer” – a reference to millionaire publisher Axel Springer.
Students blame Mr Springer’s papers for inflaming public opinion against them and say the man who shot Mr Dutschke was influenced by views expressed in a Springer publication.
Since the attack on Mr Dutschke students have been attempting to hinder distribution of Springer papers which include the mass circulation tabloid Bild Zeitung.
As huge traffic backlogs built up around the Kurfurstendamm police used water cannon and officers on horseback to disperse the protesters.
More than 180 people were arrested.
Peter Brandt, son of the West German foreign minister, Willy Brandt, was among those detained.
Later there were clashes outside three police barracks where marchers had gathered in anticipation of the release of some of those arrested.
Student dissent has been growing for some time in West Germany with the SDS organising sit-ins and non-violent demonstrations.
However, more aggressive action has been taken since the death in June last year of student Benno Ohnesorg.
He was shot by a police officer during a demonstration against the visit of the Shah of Iran to Berlin.
The SDS is part of the Extra-parliamentary Opposition group set up in 1966.
It consists of student associations, trades unions, writers and other who believe there is currently no effective parliamentary opposition to the ruling Social Democrats.

Student leader Rudi Dutschke survived being shot but his injuries contributed to his death in 1979.
In 1969 the man who shot him, carpenter Joseph Bachman, was sentenced to seven years’ imprisonment.
He committed suicide while in prison.
The Berlin student unrest mirrored protests by young people around the world in the late 1960s.
In the US, young people demonstrated against the Vietnam war while in Paris students rioted over the “bourgeois” university system and the “police state”.
However, by the early 1970s the German student movement was fractured and had lost much of its impetus and influence.