This day in history | 1968 More Kenyan Asians flee to Britain 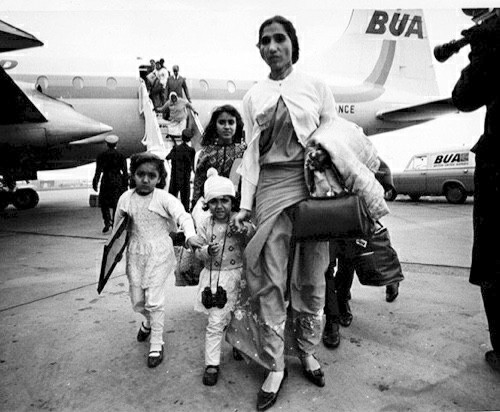 Another 96 Indians and Pakistanis from Kenya have arrived in Britain today, the latest in a growing exodus of Kenyan Asians fleeing from laws which prevent them making a living.
The party included nine children under two, and all flew in on cut-price one-way tickets costing about £60 – less than half the normal single fare.
Omar Sharmar, an Indian who was forced to close his haulage business in Mombasa when the government refused to grant him a licence, estimates he has lost £2,000.
“Only Kenyan citizens are being allowed work permits,” he said. “I was forced to sell my fleet of lorries and come to Britain to look for a new life.”
An airline official in Nairobi estimated that the charter flights had taken between 1,200 and 1,500 Kenyan Asians in to Britain.
“We did find some difficulty filling the planes until last week,” he said.
“But in the last two or three days that attitude has changed, and there doesn’t seem to be any difficulty at all now. At the present rate I think this will continue for at least a year, if not more.”
Immigration laws in Kenya are becoming increasingly draconian. Foreigners can only hold a job until a Kenyan national can be found to replace them: and more and more cities, including Nairobi, are demanding that the government bans non-Kenyans from owning a shop or trading in municipal markets.
If the Kenyan government caves in to such demands, the result is likely to be chaos, as most shops are owned by foreigners, and not enough citizens have the capital or knowledge to run small businesses.
Already, the tens of thousands of Asians, who have until now dominated commerce, industry and most key jobs in the country, are finding their lives made impossible.
Although most turned down the chance to take Kenyan nationality when it was offered to them, more than 100,000 did take up the chance to get British passports.
They are now arriving at the rate of more than 1,000 a month to start a new life in the UK, a country which most have never seen.

The mass immigration of thousands of Kenyan Asians caused a major crisis for the UK government of Prime Minister Harold Wilson.
The Home Secretary, James Callaghan, rushed through new legislation aimed specifically at curbing the flow of immigrants from East Africa.
The 1968 Commonwealth Immigration Act introduced a requirement to demonstrate a “close connection” with the UK.
There were deep cabinet splits over the legislation: cabinet papers have since quoted the then Commonwealth Secretary, George Thomson, saying that “to pass such legislation would be wrong in principle, clearly discrimination on the grounds of colour, and contrary to everything we stand for.”