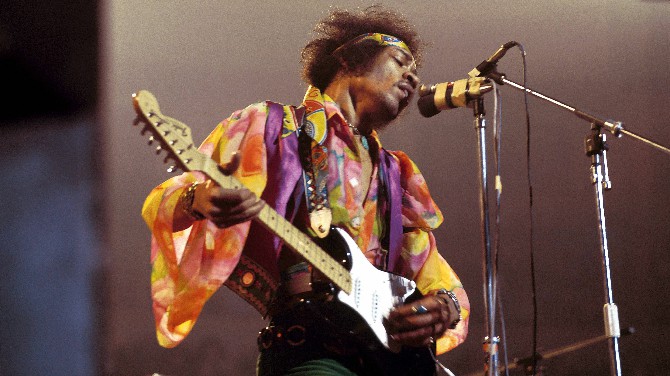 Guitarist Jimi Hendrix has died after collapsing at a party in London.
Police say there was no question of foul play. A number of sleeping pills were found at the house in Notting Hill Gate and they have been taken away for analysis.
Hendrix, 27, was born in Seattle, Washington, but rose to fame in Britain with his band the Jimi Hendrix Experience.
He will be remembered as a key figure in the music world who transformed electric guitar-playing using distortion, feedback and sheer volume to create a revolutionary new sound.
Hendrix had been staying in London since cutting short a European tour with his band after bass player Billy Cox fell ill with stress and exhaustion.
They were among the headline acts at the three-day Love and Peace Festival at Insel Fehrmarn in Germany.
The concert was not an entire success. A torrential downpour meant Hendrix postponed his performance by a day and the audience was disrupted by fighting and gunfire between rival German motorcycle gangs who eventually burned the stage to the ground.
It was after this performance the group returned to London and Hendrix sent Cox back to the United States to convalesce.
James Hendrix was part black, part Cherokee Indian and part Mexican. He left school early, having developed a keen interest in music but unable to read it.
He joined the army as a paratrooper but was discharged due to injury and took up work as a session musician.
He was spotted by former Animals’ bass player turned manager Chas Chandler who persuaded him to move to London in the autumn of 1966. He changed Hendrix’s stage name to “Jimi”, and introduced him to drummer Mitch Mitchell and bass player Noel Redding to form the Jimi Hendrix Experience.
The band’s first single ‘Hey Joe’ spent 10 weeks in the UK charts, reaching number six in early 1967.
They enhanced their reputation with flamboyant stage performances. With his long wiry hair and colourful clothes Hendrix kept audiences enthralled with his improvised solos often playing the guitar behind his back or between his legs.
Their performance of ‘Wild Thing’ at the Monterey International Pop Festival in June 1967, in which Hendrix played the guitar with his teeth, confirmed their success in the US. The Jimi Hendrix Experience became one of the most popular and successful touring acts in the world.
After the Hendrix Experience disbanded he continued performing with a range of musicians – including a memorable rendition of Star Spangled Banner at the Woodstock Festival in 1969.
In 1970 the Jimi Hendrix Experience re-formed and were in the process of recording a new LP when he died.
His final public performance in Britain was with American band War at Ronnie Scott’s club in London last week.

A coroner recorded an open verdict on the death of Jimi Hendrix.
The inquest heard he had taken nine sleeping pills but there was no evidence of drug addiction.
The guitarist’s father, Al Hendrix, a landscape gardener, was the sole beneficiary of the will, estimated to be worth in the region of $500,000.
He set up a company, Experience Hendrix, with the aim of preserving his son’s musical legacy.
On his death in 2002, the company was inherited by his step-daughter Janie. But Jimi’s brother Leon claimed he had been unfairly written out of the will and launched a lawsuit in 2004 to try to overturn it.
In 2003 a survey by the Rolling Stone magazine named Jimi Hendrix the greatest guitarist in rock history.