This Day in History | 1976 Chinese earthquake kills hundreds of thousands 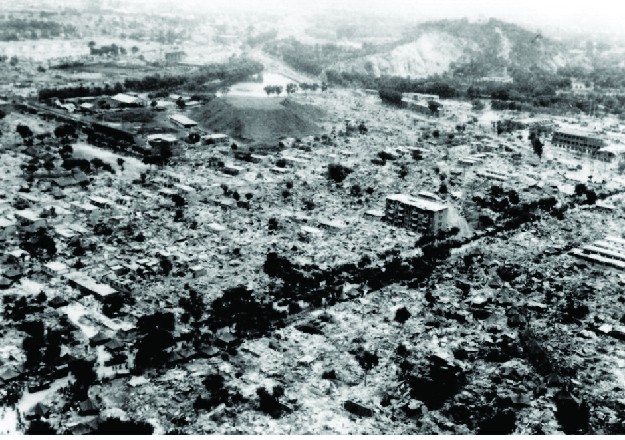 Hundreds of thousands of people are feared dead following an 8.3 magnitude earthquake in China.
The quake has virtually destroyed the city of Tangshan, north-east of Beijing, and Western sources believe the death toll may be much higher than the official figure of 240,000. Some believe the figure is more like 750,000.
The Hong Kong Royal Observatory reports the earthquake was intense although speculation of the magnitude of the quake ranges from 6.3 to 8.3.
Around 2,000 people are believed to have died when the quake devastated the city’s biggest hospital, according to sources quoting Chinese officials.
It is feared that many miners are buried alive in coal works in the industrial city, which has a total population of 1.6m.
Diplomatic observers say that up to 80,000 people died in the first shock of the natural disaster.
Up to 164,000 people have been severely injured, according to initial reports from the city.
Tangshan was at the epicentre of the earthquake, although it badly damaged Tientsin. Tremors were also felt in Beijing, where residents were urged to live in the streets and keep to open spaces as it is not thought to be safe to return to their homes in the city.
The force of the quake has been so strong that people are reported to have been thrown into the air after roads, bridges, railway stations, homes and factories were completely destroyed.
The quake has also knocked out power throughout the city, making rescue efforts difficult.
When the earthquake struck Tangshan at 0342 local time, more than a million people lay sleeping. The entire earthquake reportedly lasted approximately 14 to 16 seconds. It was followed by a 7.1 magnitude aftershock.
Survivors have been digging through debris to answer the calls for help as well as find missing relatives.
There is a deep-seated peasant belief that the “Year of the Dragon” – which happens every 12 years – augurs ill.
The survivors of the Tangshan quake are living in tents and are expected to be moved to winter shelters, the New China news agency has reported. Aircraft and lorries have been taking large quantities of relief supplies to help the relief effort.
The authorities later hope to move people to simple houses, which can withstand tremors and are warm and rainproof before winter sets in.
Chinese officials have rejected any offers of help from the outside world, saying that survivors have enough to eat and wear and there are sufficient medical supplies and doctors in the city.

Officially, the Chinese government estimated between 240,000 and 250,000 people died in the Tangshan earthquake.
The rebuilding of Tangshan began almost immediately after the earthquake and eventually the entire city was rebuilt. It is now home to more than a million people – earning it the name “Brave City of China.”
In the decades since the quake, the death toll is estimated closer to half a million although some believe it is higher still. This would make this the most deadly quake in the twentieth century, and the strongest since the Alaska quake in 1964 which was of magnitude 9.2.
More people died in earthquakes in the first 10 months of 1976 than in any year since 1970.
During 1976, there were a string of tremors, stretching from China to Greece, which Swedish expert Dr Marcus Baath believes may be a signal of new movement in the Earth’s crust.
In August 1976, a new earthquake measuring 6.9 was reported 250 miles north of Chungking, which is around 1,000 miles from Tangshan.