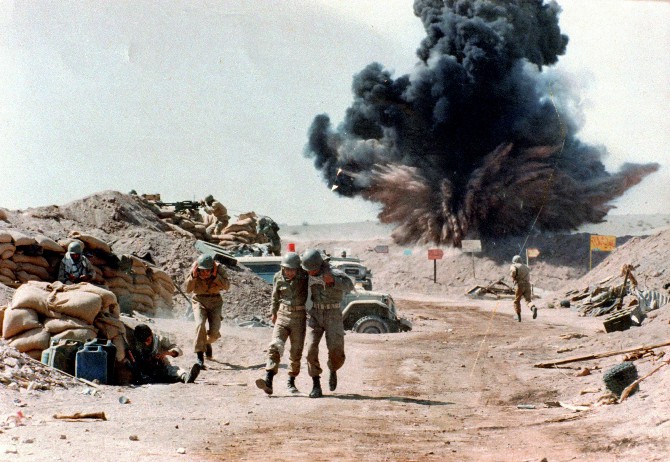 Iraqi planes have bombed and set on fire Iran’s Kharg Island crude oil export terminal.
Iranian officials have confirmed oil exports from the terminal, off the north-west coast of Iran, have been halted and given no indication when they may be resumed.
The fighting began three days ago when the Iraqi leader, Saddam Hussein, ordered a bomb attack against Iran following months of border clashes.
Tension between the two countries has been rising since Ayatollah Ruhollah Khomeini was hailed the leader of the Islamic revolution in Iran and took control from Shah Reza Pahlavi in February 1979.
Appeals for an end to the violence from the United Nations Security Council, the secretariat of the Organisation of Petroleum Exporting Countries and the European Economic Community have all gone unheeded.
The worst fighting has been close to the disputed Shatt al arab waterway, which forms Iraq’s only access to the Persian Gulf.
The strategic Iranian cities of Khorramshahr and Abadan are said to be holding out against heavy Iraqi pressure, which has been mostly directed at oil facilities there.
Baghdad is demanding recognition of its sovereignty over the Shatt al arab waterway, the lower reaches of which also mark the border between Iraq and Iran.
It has torn up the 1975 Algiers agreement under which Iraq agreed to shift the border with Iran to the middle of the estuary.
Speaking in Baghdad tonight, Iraq’s deputy commander in chief of the armed forces, General Adnan Khairalla, left no doubt Iraq would extend the war to achieve its aims, regardless of international or other pressures.
The Foreign Office is advising British ships not to visit Iraqi or Iranian ports and is also discouraging British citizens from visiting Iraq.
Although no general order has been given for the evacuation of British subjects from Iraq, many British families have been fleeing the country and the first have arrived back in the UK today.
Western oil industry officials say there is no immediate threat of a world shortage because the non-Communist world has about 100-days worth of oil in stock.
However, there are fears war between the two sides could lead to the closure of the Strait of Hormuz, the narrow passage which forms the gateway to the Gulf, through which much of the oil from Saudi Arabia, Kuwait and other smaller states is transported.

The war between Iraq and Iran did not initially appear likely to be a prolonged one – owing to the limited military capabilities of the two sides.
The two superpowers, the USA and the USSR, declared neutrality. The US, under President Jimmy Carter was committed to keeping the Hormuz Strait open. The Soviets had paid to arm Iraq and shared a common border with Iran.
Ayatollah Ruhollah Khomeini was seen as the spiritual leader of the Islamic Revolution. He regarded Saddam Hussein, a Sunni Muslim, as the infidel head of the country that had expelled him in 1978.
Iraq sought to take advantage of the political confusion in Iran by demanding the amendment of the Algiers agreement over the Shatt al arab waterway. When the demands fell on deaf ears, it culminated in the bombing of Iran which began on 22 September.
Iraq’s superior military equipment gave it initially the upper hand in the fighting, but Iran fought back and even advanced to occupy some Iraqi territory in 1984 and 1986.
Both sides eventually agreed to a ceasefire in August 1988. Official reports say more than 400,000 were killed and 750,000 wounded in eight years of fighting.