This Day in History: 1981 Bobby Sands dies in prison 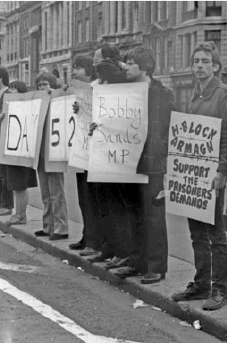 Hunger striker Bobby Sands has died in prison 66 days after first refusing to eat.
The 27-year-old republican spent the last days of his life on a water bed to protect his fragile bones.
He had been in a coma for 48 hours before being pronounced dead by medical staff at the Maze prison in Northern Ireland.
Sands’ parents, brother and sister were at his bedside when he died.
This was the second time Sands had been on hunger strike, the first was in 1980 when a number of prisoners in the Maze prison were demanding political status for republican prisoners.
Mr Humphrey Atkins, Secretary of State for Northern Ireland issued a statement shortly after the death.
He said: “I regret this needless and pointless death.
“Too many have died by violence in Northern Ireland. In this case it was self-inflicted.
“We should not forget the many others who have died.
“It is my profound hope and prayer that the people of Northern Ireland will recognise the futility of violence and turn their faces away from it.”
Three other republican prisoners at the Maze prison remain on hunger strike. There is grave concern for 25-year-old convicted murderer Francis Hughes, who began his strike 15 days after Sands.
Bobby Sands, who had served five years of a 14-year sentence for possessing a gun, began his hunger strike on 1 March.
He had softened his stance since the first strike and this time was making five main demands: that republican prisoners be allowed to wear their own clothes, that they be given free association time, visits and mail, that they should not to have to carry out penal work and should be given back lost remission.
The Provisional IRA is now expected to launch a campaign of violence and destruction in response to Sands’ death.

Bobby Sands was the first of 10 republican prisoners to die after hunger strikes.
More than 60 civilians, police and soldiers also died in violence directly attributable to the hunger strikes.
Three days after the hunger strikes came to an end on 3 October, the Ulster Secretary James Prior negotiated a package of concessions for the Maze prisoners – much to the fury of the loyalist community.
He met two of the prisoners’ demands – the right to wear their own clothes and the restoration of 50% of lost remission for those who obeyed prison rules for three months.