This Day in History | 1981 Charles and Diana Marry 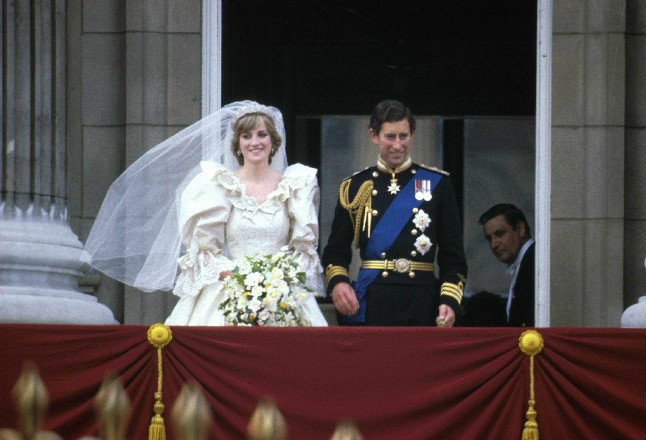 Crowds of 600,000 people filled the streets of London to catch a glimpse of Prince Charles and Lady Diana Spencer on their wedding day.
The couple were married at St Paul’s Cathedral before an invited congregation of 3,500 and an estimated global TV audience of 750 million – making it the most popular programme ever broadcast.
Britons enjoyed a national holiday to mark the occasion.
Lady Diana, 20, arrived almost on time for the 1120 BST ceremony after making the journey from Clarence House in the Glass Coach with her father, Earl Spencer.
She made the three-and-a-half minute walk up the red-carpeted aisle with the sumptuous 25 ft (7.62 m) train of her Emmanuel designed, ivory taffeta and antique lace gown flowing behind her.
Archbishop of Canterbury Dr Robert Runcie led the traditional Church of England service, but he was assisted by clergymen from many denominations.
The bride’s nerves showed briefly when she mixed up the Prince’s names – calling him Philip Charles Arthur George, rather than Charles Philip.
Charles, 32, in the full dress uniform of a naval commander, slightly muddled his vows too, referring to “thy goods” rather than “my worldly goods”.
After a brief private signing ceremony the Prince and Princess of Wales walked back down the aisle to the refrain of Elgar’s Pomp and Circumstance.
The newlyweds took the open-topped state landau to Buckingham Palace where they emerged on the balcony at 1310 BST to give the crowds the kiss they had been longing to see.
Afterwards Charles and Diana retired from the public gaze to enjoy toasts and a wedding breakfast with 120 family guests.
A “just married” sign attached to the landau by Princes Andrew and Edward raised smiles as the married couple were driven over Westminster Bridge to get the train to Romsey in Hampshire to begin their honeymoon.

In less than a year the couple produced their first child, William, on 21 June 1982.
A second son, Prince Harry, was born on 15 September 1984.
By that time Prince Charles’ long-running relationship with Camilla Parker-Bowles was putting strain on his marriage.
Princess Diana’s relationship with the rest of the Royal Family deteriorated and she developed bulimia.
The couple separated in 1993.
Diana spoke publicly about her problems and her own and her husband’s infidelities in a Panorama documentary in November 1995.
The marriage formally ended with a decree absolute in August 1996.
Diana was killed in a car crash in 1997.
Prince Charles and Camilla Parker-Bowles married on 9 April 2005.