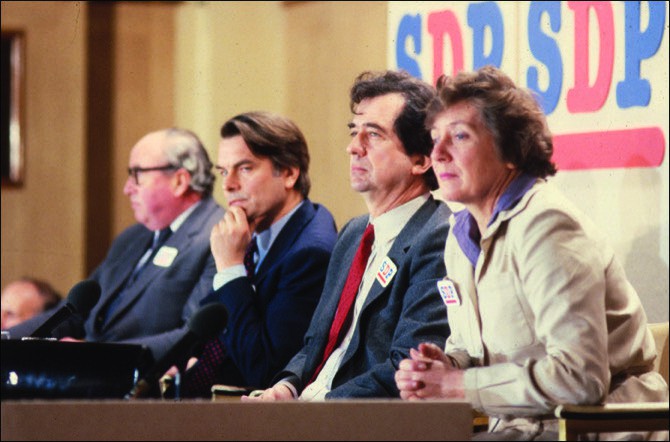 The Social Democrats have launched their new political party pledging to “reconcile the nation” and “heal divisions between classes”.
At a crowded press conference in London, signalling the start of a massive media campaign to recruit supporters, the party outlined its hopes of breaking the political mould and of making significant gains at the next General Election.
The Gang of Four, the nick-name of the four Labour defectors who set up the SDP, outlined their hopes of winning, with the Liberals, a majority in the Commons.
Roy Jenkins, former Labour cabinet minister, David Owen, William Rodgers and Shirley Williams published a 12-point document covering elections, education and international co-operation.
The party’s proposals included calls to reform the political system, environmentally friendly policies, equality of opportunity for women and ethnic minorities, and a fairer distribution of wealth.
Mr Jenkins said formulating an incomes policy would be “one of the most difficult things we have to do”.
The Gang of Four describe themselves as a left-of-centre party and is the first to be run in Britain with a one-member one-vote system for policies and selection.
Dr Owen said the party offered Britain a fresh start and he said recruits were coming from other parties all the time.
“We are going to be free: we will make decisions… But they will be your decisions,” he told potential members.
He accused the Prime Minister Margaret Thatcher of having divided the country between the North, Scotland, Wales, and the still “relatively prosperous” South East.
The four left Labour citing major differences over European and defence policies as the party has taken a sharp turn to the left under leader Michael Foot.
The opposition leader has insisted they will win no support.
But with call centres waiting to hear from future supporters and an estimated £170,000 spent on regional journeys and advertising, the SDP is determined to win over MPs and then voters.

The party joined forces with the Liberal Party to create the Liberal-SDP Alliance in autumn 1981.
It enjoyed increasing support but by the 1987 general election the Alliance was weakened by high Labour support.
After the election, Liberal Party leader David Steel proposed an official merger with the SDP and while most of the SDP’s membership voted in favour of the merger, its leader David Owen remained adamantly opposed to it.
He pledged to fight the now new Social and Liberal Democrat Party (SLD).
But by 1990, the party had lost a great deal of credibility and support and the SDP was folded.