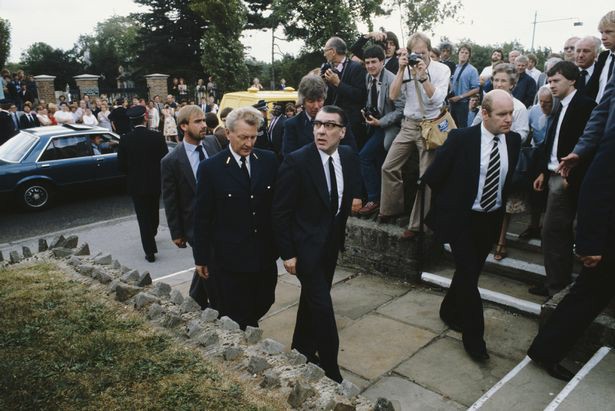 The notorious East End gangsters Ronnie and Reggie Kray have been allowed out of prison for their mother’s funeral.
Violet Kray, 72, died of cancer last week.
It was the first time the Krays, 49, had been seen in public since being sentenced to life imprisonment for murder in 1969.
Security was tight for the funeral service in east London.
The brothers arrived separately – both were handcuffed to a prison guard and flanked by police officers.
Ronnie Kray was brought from Broadmoor Hospital for the criminally insane in Berkshire where he has spent the last four years.
His brother travelled from Parkhurst Prison in the Isle of Wight where he is still held as a maximum security Category “A” prisoner.
The service was attended by a number of celebrities and underworld figures known to the twins from the days when they ran one of London’s biggest criminal operations.
Among them was actress Diana Dors who arrived wearing a black dress and sunglasses and carrying a bouquet.
The brothers were not allowed to attend the graveside service at Chingford Mount cemetery in Essex where their mother was interred in the family burial plot.

Ronnie and Reggie Kray ran one of London’s biggest crime rackets with their elder brother, Charlie.
They were jailed for the murders of George Cornell and Jack “The Hat” McVitie.
A film about their lives in 1990 fuelled a campaign to get them released, but successive home secretaries refused to free them.
Ronnie died of a heart attack in prison in 1995. Reggie was released on compassionate grounds a month before his death from cancer in October 2000.