This day in History | 1983 England fans rampage in Luxembourg 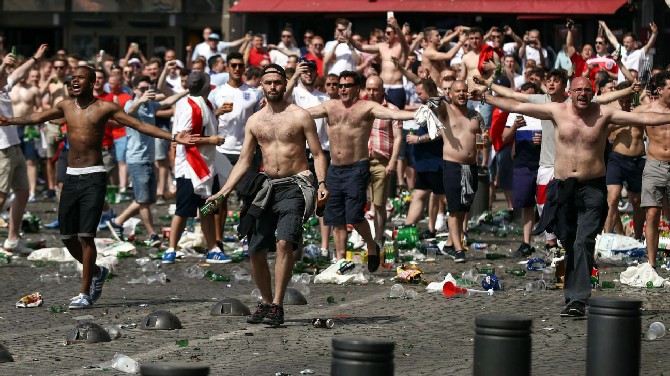 More than 20 English football supporters have been arrested in Luxembourg after a night of violence.
The fans are being held for drunkenness, fighting and stealing after England was knocked out of the European Championship in spite of beating Luxembourg.
Denmark’s victory over Greece earlier on Wednesday meant England finished second in their group and do not qualify for the finals next year.
The fans were not placated by a 4-0 win over Luxembourg and trouble started inside the stadium during which two police officers were badly hurt.
Afterwards England supporters raced through the city centre overturning cars and smashing shop windows.
About 500 police officers and 150 soldiers were on duty in an attempt to head off trouble.
They were hoping to prevent a repeat of violent disturbances in 1977 when England fans also ran riot.
But the omens had not been good with trouble flaring before many of the 2,000 fans even reached their destination.
On Tuesday about 20 English men beat up a railway employee in Belgium and four police officers needed hospital treatment after fighting broke out among drunken fans who got off a ferry in Ostend.
At the height of Wednesday night’s violence riot police from neighbouring West Germany had to be drafted in to help the over-stretched Luxembourg forces.
Weapons seized included axes and aerosol cans filled with tear gas.
Many England supporters spent the night on the streets because local hotels refused to take them in.
Finally they were herded to the railway station by the security forces where a train, brought forward by five hours, was waiting to take them to the ferry port in Ostend, Belgium.
Those arrested are being kept in custody overnight and are expected to appear in court tomorrow.

A total of 50 fans were arrested – 13 received prison sentences of up to four months and fines of up to £250.
Luxembourg’s minister of sport said the country would never again host a match involving England.
The trouble further sullied the reputation of England football supporters infamous for rioting across Europe.
In England, courts imposed tougher sentences and football clubs also started to clamp down on violent supporters, sometimes banning them from their grounds.
But numerous attempts by clubs and successive governments have failed to totally eradicate the problem.
However, the good behaviour of England’s fans during the World Cup in South Korea and Japan in 2002 went some way to repairing their reputation abroad.