This Day in History | 1983 – Reagan launches Cold War into space 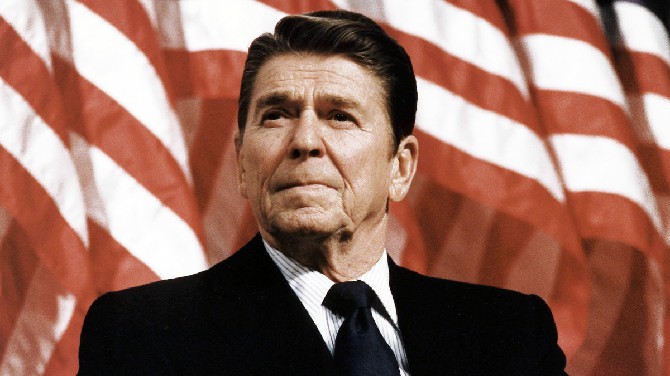 President Reagan has unveiled plans to combat nuclear war in space.
The Strategic Defense Initiative (SDI) proposes a defensive shield, using laser or particle beam technology to “intercept and destroy” incoming missiles as they travel through the stars.
Defense analysts have described it as the first major attempt to move away from the 30 year-old Cold War strategy of Mutually Assured Destruction (MAD) – where the threat of nuclear attack acts as a deterrent.
In a televised address from the White House the US leader said: “We seek neither military superiority nor political advantage. Our only purpose – one all people share – is to search for ways to avert the danger of nuclear war.”
Speaking just half an hour after the House of Representatives (H0R) had rejected the Republican Party’s demands for 10% increases in defence spending, President Reagan attempted to justify his $2 trillion, five-year military spending plans.
In the first major congressional revolt against Mr Reagan’s economic policies the HoR have voted in Democrat proposals to reduce the Republican budget by more than half.
The President said: “They’re the same kind that led the democracies to neglect their defences in the 1930s and invited the tragedy of World War II.”
Senior White House aide Michael Deaver reported a positive reaction to Mr Reagan’s scheme: “He has had the most favorable response to any speech since he was elected President.”
Critics argue SDI contravenes the Soviet-American Anti-Ballistic Missile (ABM) Treaty of 1972.
Article V of the treaty states: “Each party undertakes not to develop, test or deploy anti-ballistic missile systems or components.”
President Reagan has stressed SDI does not entail the actual development of a defensive shield, but is a programme for research and development.

Reagan’s SDI became known as “Star Wars” – after the George Lucas film.
President Andropov of the USSR was highly critical of the plan, saying it violated the 1972 ABM Treaty and there was little difference between building up weapons for purportedly defensive or offensive purposes.
The Democrats in the US – and even some Republicans – claimed Reagan’s initiative was an expensive and unfeasible diversion from his administration’s domestic failures.
SDI signalled a new round in the Arms Race and a worsening of the relationship between the US and the USSR.
The increasing financial strain it placed the Soviet Union under contributed to the break up of the regime.
SDI was abandoned in 1993 and the department was renamed the Ballistic Missile Defence organisation.