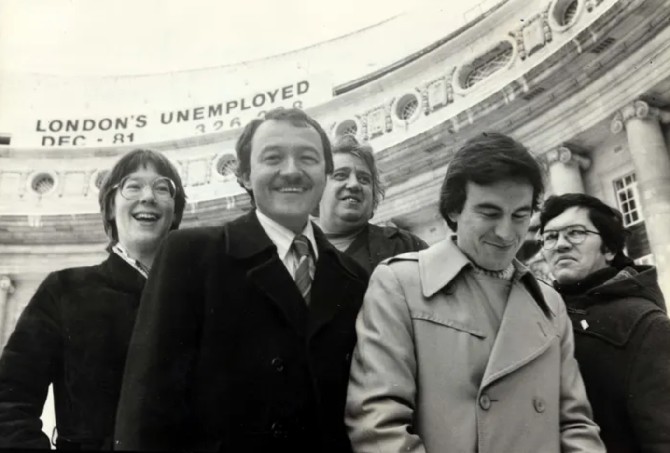 Thousands of people have taken part in festivities to mark the historic final hours of 97 years of local rule in London.
A throng of 250,000 people have gathered on the South Bank in London, home to the Greater London Council, which will not exist from midnight tonight.
Festivities will end with the largest display of fireworks ever seen in the city after a week of events costing £250,000.
Six other Labour-led metropolitan county councils will come to an end today ending 12 years of the strategic administration of the metropolitan county councils.
These are the West Midlands, Greater Manchester, Merseyside, Tyne and Wear, West Yorkshire and South Yorkshire councils.
The disbanding of seven of the largest councils in Europe was ordered by the government to cut bureaucracy and increase efficiency, amid a swathe of criticism across the political spectrum.
The government insisted transferring their powers to local councils and quangos would create greater electoral accountability.
But hopes of achieving 7,000 job cuts in London, with a corresponding saving of £50 million, have proved an overestimate as most have moved to jobs within the new organisations.
In the metropolitan districts some 32,000 staff and 600 councillors are affected by the changes, with the same number of councillors and 20,000 staff affected in London.
Despite job cuts staff are out supporting the festivities around the country and in London there are giant screens bearing farewell messages from celebrities.
The last GLC concert to be staged at the festival hall will include Haydn’s Farewell Symphony, by the Philharmonic Orchestra, lit with candles until the final one is blown out by its leader Ken Livingstone.
Many people are wearing badges bearing the message “we’ll meet again”, mirroring a banner on the GLC’s building County Hall, where flags are flying at half-mast, opposite the Houses of Parliament.
Despite the taunts from the GLC to Mrs Thatcher’s government over its forced closure, the building will become the property of the London Residuary Body.
It is one of the quangos charged with completing the dismantling of the councils as more power passes to Whitehall.

Once Labour regained control of the GLC from the Tories in May 1981 the Prime Minister Margaret Thatcher was determined to abolish the council.
There began a four year political battle to remove the council, run by the Labour politician Ken Livingstone, whose far-left policies earned him the title Red Ken.
An initial attempt was defeated, but a Bill published in 1984 precipitated the end of the GLC.
In May 1997 Labour was elected to power with a manifesto commitment to allow Londoners a referendum on whether they wanted a new mayor and a Greater London Authority.
They overwhelmingly voted for a council which came into existence in July 2000 with Ken Livingstone as mayor.
He won the mayoral election as an independent after Labour expelled him for not supporting the party’s official candidate.
He was re-admitted into the party in January 2004 after Prime Minister Tony Blair admitted he was wrong about his prediction that Mr Livingstone would be a “disaster” for London.