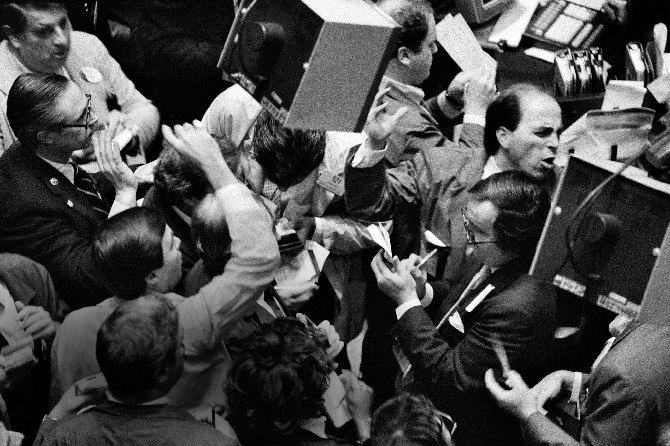 The world’s stock market has collapsed after shares on Wall Street suffered a wave of panic selling.
The Dow Jones industrial average plummeted by a record 508 points, registering a percentage drop of 22.5%.
On Wall Street itself, share prices crashed across the board in frenzied trading that saw collective losses worse than the infamous “Black Monday” in October 1929.
In London the value of quoted shares fell by £50bn as the FT 30-share index dived 183.7 points to 1629.2.
The previous sharpest one day fall was on March 1, 1974 after Labour’s indecisive election victory, when shares fell 7.1%.
The FTSE index also crashed more than 300 points with a loss of £63bn.
The collapse was triggered by Friday’s fall on Wall Street and a steep drop in Tokyo.
The White House attempted to calm investors by issuing a statement declaring that President Ronald Reagan remained convinced that the US economy was sound.
Dealers marked prices down in an effort to discourage sellers amid scenes close to hysteria.
The percentage drop was the second largest ever next to the 24.4% fall of 12 December, 1914.
Chairman of the New York Stock Exchange John Phelan said: “This is the nearest thing to a financial melt-down I’ve ever come across. I would not want to be around for another one like this.”
But officials warned against comparisons, saying that the situation is dramatically different from 1929.
Trading activity was driven down by growing fears of rising interest rates and a falling dollar.
These were exacerbated by the news that the US had retaliated against Iranian attacks in the Gulf by bombarding an offshore oil rig.

In the wake of the 1987 crash, which also became known as Black Monday, markets around the world were put on restricted trading mainly because at the time computers were dealing with so many orders that they were unable to keep up.
By the end of October, stock markets in Australia had fallen by 41.8%, Hong Kong 45.8% and the United Kingdom 26.4%.
The effects of the crash were not as crippling as expected because it was not followed by a depression.
Over the next decade interest rates went down and investors showed new faith in the market.
The debate over the cause of the crash continued for many years after the event but economists have never been able to name a single factor that ushered in Black Monday.