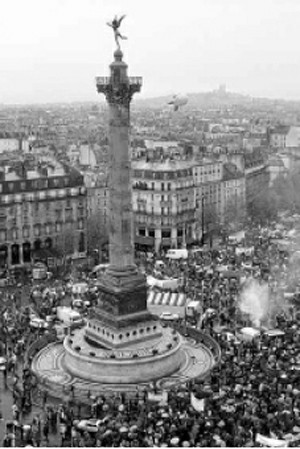 About 500 people have been involved in scuffles in the Place de la Bastille in Paris.
Hundreds of thousands of revellers took to the streets of the French capital last night to celebrate the 200th anniversary of the storming of the Bastille.
Most people enjoyed the carnival atmosphere in the city but a group of trouble-makers fought amongst themselves, harassed foreign TV crews and threw stones at the police as they tried to restore order.
Last night was the official opening of the concert hall, Opera Bastille, which has been built on the site of the Bastille prison – where the French Revolution began in 1789.
Celebrations carried on into the small hours of this morning in the biggest street party since France was liberated after World War II.
There was traffic chaos as people danced in the streets, wearing the red, white and blue of the revolutionary tricolour and letting off fireworks.
As well as the traditional military march down the Champs Elysees this morning, the bicentennial anniversary has been marked by a spectacular parade of dancers, musicians and floats from around the world this evening.
Heads of state from 40 countries and a global television audience of 500m watched the procession – devised and organised by Jean-Paul Goude – down the Champs Elysees to the Place de la Concorde.
Costing £8m, the Marseillaise procession was based on the theme of the rights of Man and world music. It culminated in a powerful rendition of the French national anthem – the Marseillaise – by opera singer Jessye Norman.
Some world leaders were in the city for the G7 World Economic Summit opened by President Mitterand at the Louvre pyramid in the afternoon.

The Bastille was constructed as a royal fortress in the 14th Century.
It symbolised untouchable royal power and extravagance to an impoverished populace.
Encouraged by local politicians and radical new philosophies, Parisians targeted the two royal strongholds in the city in uprisings beginning on 12 July 1789.
They seized guns from the barracks at Les Invalides and stormed the Bastille to release the prisoners there and execute their jailers.
The events of 14 July were limited but they symbolised the beginning of a break from the traditional order.
Ten years of bloody revolution followed which included a radical new constitution and the execution of King Louis XVI and his self-indulgent wife Marie Antoinette.