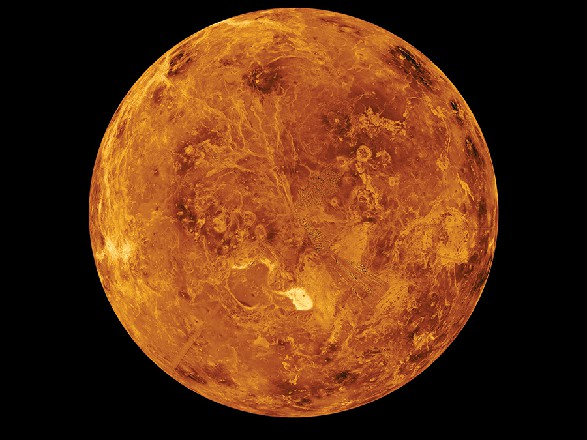 The Magellan spacecraft has arrived at the planet Venus after an epic 15-month journey from Earth.
The craft arrived just after 1730 BST (1630 GMT). Soon after, controllers at the Jet Propulsion Laboratory in California instructed it to fire its solid-rocket motor for 83 seconds to slow it down into a long, looping orbit around Venus.
They then faced an agonising 30-minute wait while the craft went out of communication behind the planet.
Only when it emerged from the shadow of Venus was it clear that the manoeuvre – one of the most critical of the mission – had been successful.
The craft will spend several years making a pass over the planet every eight Earth months – just one day on Venus.
The result will be a detailed map of the planet described by Nasa as a “hell-hole”. Scientists hope it will help answer the question of how our nearest neighbour, and the planet most like Earth, ended up uninhabitable.
Previous probes sent to Venus have revealed an environment as unlike that on Earth as it is possible to imagine.
The atmosphere on Venus is almost entirely made up of carbon dioxide. The yellowish clouds which shroud the planet’s surface are partly sulphuric acid, and temperatures at the surface are hot enough to melt lead.
“In some ways Venus is very Earthlike, in others it is totally bizarre,” said Jim Garvin, of Nasa. “We want to find out why.”
Magellan can see surface details as small as 300 ft (91.5 meters) in diameter.
One of the questions scientists will be seeking to answer is whether Venus reached its surface temperatures of 480 degrees C as a result of global warming.
The findings could give an insight into how the greenhouse effect might develop on Earth.
Magellan was built on a shoestring budget and is made up of a combination of materials from other space projects. The radio dish comes from Voyager, and the central control system from the Galileo project.
The recycling of equipment from one project to the next is a growing trend in space exploration in an era of ever-tighter budgets.
Nasa has gone seriously over budget overhauling the space shuttles since the Challenger disaster in 1986. Magellan itself is Nasa’s first attempt to explore deep space for 11 years.

Magellan spent four years mapping Venus, producing a detailed radar map of 99% of the planet. It found evidence of volcanic activity over about 85% of its surface.
One of the puzzles it raised for scientists was the fact that the highlands of the planet appeared abnormally bright, while lower elevations appeared dark.
Scientists now believe this is because the mountains on Venus are covered in condensed melted metal.
The metal, probably lead, is vaporised at lower levels by the incredibly high temperatures, then cools as it rises.
The metal then settles like frost on the planet’s peaks to form a thin, highly reflective layer.
Magellan operated for four years before plunging to the surface of Venus in October 1994.
In a planned manoeuvre, scientists instructed the satellite to descend slowly into the atmosphere, where it eventually burnt up, sending data back to Earth as it did so.
The Magellan probe was one of Nasa’s most successful interplanetary missions.
The next attempt to explore the planet will be in late 2005, when the European Space Agency plans to launch its Venus Express mission.