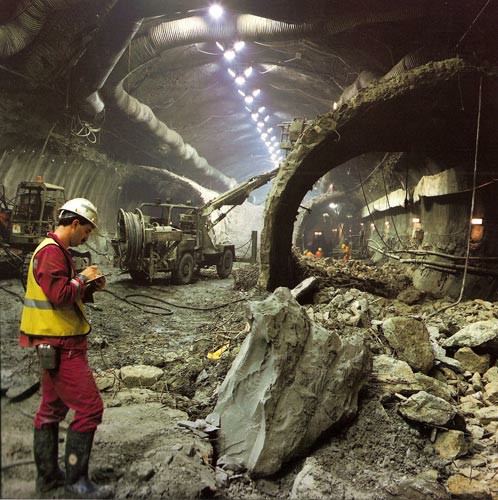 Construction workers have drilled through the final wall of rock to join the two halves of the Channel Tunnel and link Britain to France.
The momentous breakthrough links the UK to Europe for the first time since the Ice Age, about 8,000 years ago.
To a throng of cheers, construction workers celebrated with champagne – the only time alcohol has been allowed underground on the work site.
French worker, Philippe Cozette, and his British counterpart, Graham Fagg, waved flags and shook hands as the first men able to walk between the two countries.
Only moments earlier at 1100 GMT, a half-metre wall of rock separated Britain from mainland Europe.
The men continued drilling until a hole was created big enough to allow vehicles through.
The first Britons walked through the tunnel to have their passports stamped in France.
There were similar scenes on the other side as a French party which drove into Folkestone, Kent, headed straight over to customs and immigration officers.
Tributes
Transport secretary Malcolm Rifkind was among the first through.
Speaking to the BBC, he said: “The physical contact that has been achieved between Britain and France today is symptomatic of many changes that we have been experiencing in the last 20 years.
“It is all happening and it is continuing to happen at an accelerating pace.”
Downing Street called the event a “tribute to private enterprise”.
The Channel Tunnel venture is expected to lead to the construction of a high speed train link across Kent, to match one France has already built.
Work on the Channel Tunnel began in 1986 and it is due to be completed by 1993.

The Channel Tunnel was first formally proposed in 1963 although the concept had long been under discussion.
Its cost ballooned to £12bn – more than double original estimates and construction finished a year late in 1994.
Original expectations of public enthusiasm for the project proved over-optimistic and Eurotunnel, the tunnel operator, unveiled a loss of £925m in 1995 – one of the biggest in UK corporate history.
A fire in the tunnel which lead to freight traffic being suspended for more than six months in 1996 added to its woes.
It eventually caught on as a mode of transport and Eurotunnel announced its first net profits in 1999.