This day in history | 1991 Bloodshed at Lithuanian TV station 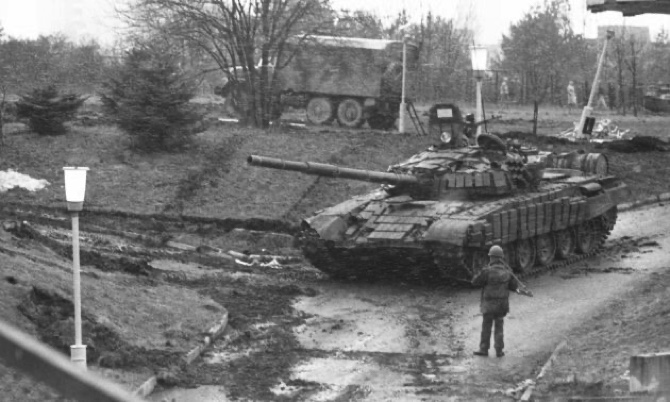 At least 13 people have been killed and more than 140 injured by the Soviet military in the capital of Lithuania as Moscow continues its crackdown on the Baltic republic and its drive for independence.

Troops broke through the defences set up by more than 1,000 protesters who had gathered to protect a Lithuanian radio and television centre at about 0200 local time.

Soldiers then smashed through the glass windows of the station and overwhelmed defenders armed with sticks.

A sound truck moved through the city telling residents that power was being assumed by the National Committee for Salvation, a group formed by the small pro-Soviet faction of the Lithuanian Communist Party, three days ago.

“Lithuanians, do not resist,” the military said. “Your government has deceived you. Go home to your families and children.”

Many of the Lithuanians refused to retreat under the attacks and sporadic gunfire continued for at least 90 minutes.

The television and radio stations, which broadcast throughout the republic, went off air after the assault.

Just before the radio station shut down, an announcer said: “We address all those who hear us. It is possible that (the army) can break us with force or close our mouths, but no one will make us renounce freedom and independence.”

The broadcast facility was one of several buildings seized by Soviet troops in Vilnius since they began cracking down on 11 January. Yesterday, tanks ploughed into unarmed demonstrators in Vilnius before soldiers opened fire on a crowd attempting to defend a government building.

The assault represents a major escalation in the Soviet Government’s use of force against the republic.

It is the bloodiest military attack on peaceful citizens since troops killed nine nationalist demonstrators in Georgia in 1989.

Despite the attack, it is not immediately clear what role Soviet President Mikhail Gorbachev had in ordering the assault.

The president of the Russian Federation, Boris Yeltsin, condemned the violence and called for the withdrawal of troops sent to Lithuania and the other Baltic republics – Latvia and Estonia.

Yeltsin warned the Federation Council, the country’s highest policy-making body: of “an escalation of violence” across the Baltic region.

US President George Bush also denounced the action by the Soviet military and warned that it could harm Soviet-US relations.

“There’s no justification for the use of force against peaceful and democratically-elected governments,” he said.

“The thoughts and prayers of the people of the United States are with them, and particularly with the Lithuanian people who have experienced a great tragedy.

“We condemn these acts which could not help but affect our relationship.”

Lithuania was seized by the Soviet Union after World War II, along with Latvia and Estonia.

Last March, it became the first of several Soviet republics to declare independence from the Soviet Union.

The final number of civilians killed in the crackdown was 14.

The conflict over the Baltic states continued to escalate as Soviet troops stormed a police academy in Latvia just two days after the assault on Lithuania.

Troops occupied the three states and tension continued to mount until the failed Moscow coup in August that year.

Boris Yeltsin eventually recognised the independence of Latvia, Estonia and Lithuania on 7 September and all three were admitted into the United Nations later that month.

By the end of the year, the Soviet Union was replaced by the Commonwealth of Independent Republics, with many states gaining full independence.

As a result, President Mikhail Gorbachev stepped down from office after seven years as leader of the Soviet Union on Christmas Day 1991.