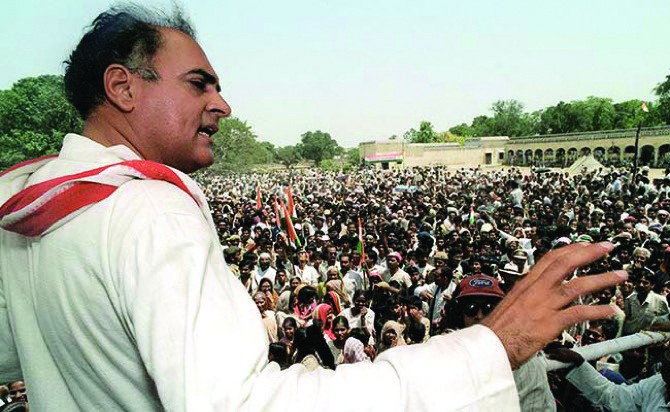 Rajiv Gandhi, the 46-year-old former Indian prime minister, has been assassinated.
He was campaigning for the Congress Party on the second day of voting in the world’s largest democratic election when a powerful bomb, hidden in a basket of flowers, exploded killing him instantly.
At least 14 other people were also killed in the attack in the town of Sriperumbudur, about 30 miles from Madras, the capital of the southern state of Tamil Nadu.
No-one has admitted carrying out the murder but it is being blamed on Mr Gandhi’s arch enemies, the Liberation Tigers of Tamil Eelam (LTTE), a violent guerrilla group fighting for a separate homeland for Tamils on the island of Sri Lanka.
Rajiv Gandhi’s death has shocked the world and marks the end of the Nehru dynasty that had led India for all but five years since independence from Britain.
After his brother Sanjay was killed in an air crash in 1980, he gave up his job as an airline pilot and was elected to Sanjay’s parliamentary seat.
He became prime minister after his mother, Indira Gandhi, was assassinated by her own Sikh bodyguards in 1984.
Often seen as a reluctant leader, he and his Congress Party won a record majority later that year.
He encouraged foreign investment, a freer economy and rejuvenated his own party, ridding it of his mother’s unelected cronies.
After he lost the election in 1989, Rajiv Gandhi resigned.
This time, the Congress Party was expected to win the largest number of parliamentary seats – but not overall control – against the Hindu BJP Party and the Janata Dal, now split into two parties.
The campaign has been marred by sectarian violence between Hindus and Muslims in what has proved to be the most violent election in Indian history. Two hundred people have already been killed.

It later emerged that a female Tamil Tiger (LTTE) suicide bomber had assassinated Rajiv Gandhi.
In 1987 Mr Gandhi, then prime minister, had sent Indian peacekeeping forces to Sri Lanka in a disastrous attempt to impose peace in the country. The move proved unpopular both at home and abroad and his troops pulled out in 1990.
A year after Mr Gandhi’s death, the Tamil Tigers were outlawed in India.
PV Narasimha Rao, succeeded Gandhi as Congress leader and became India’s prime minister later that year.
After a number of bribery scandals, the party was heavily defeated in the 1996 elections. But its popularity was revived in 1998 by Mr Gandhi’s Italian-born widow Sonia who took over as leader and returned the party to power in the 2004 elections.
She refused to become prime minister herself, however, and the job went to former finance minister Manmohan Singh.