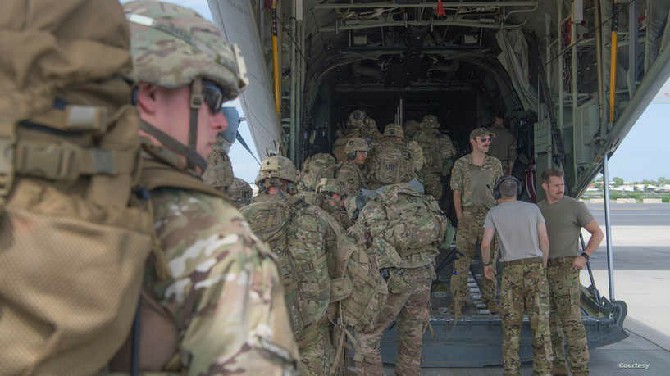 More than a thousand Kurds have besieged a US military base near the northern Iraqi city of Dohuk, pleading with American troops not to withdraw.
Kurdish leaders have called on allied forces to remain in the country indefinitely, fearing retaliation from the Iraqi army.
US and European forces have been safeguarding Kurdish enclaves from attack by Saddam Hussein since the end of the Gulf war.
But now they have begun to depart, leaving the fate of the Kurds in the hands of a lightly armed UN protection force they fear will offer inadequate protection.
Dohuk, an important Kurdish centre 25 miles south of the Turkish border, lies outside the safety zone set up by the allies in northern Iraq for Kurdish refugees.
The Kurds have been assured the Iraqi army has agreed not to move in when allied soldiers leave. But they remain anxious.
Belgian troops, which have been in eastern Iraq for six weeks, will be gone in 12 days, along with their trucks and equipment.
Forces from Holland and France are also due to go, but their UN replacement forces have yet to arrive.
Medical units from Italy, Spain and France have started to leave because their governments believe their job is complete.
Although there has been no official announcement from the American camp, there are signs that US troops have begun their withdrawal, to the consternation of the local Kurdish population.
Many Kurds say their families and friends who fled to Iran will not return until the future seems more certain, but their protests are unlikely to have any effect.
A US military officer said there was no firm date for a full allied departure from northern Iraq, but Kurds fear the handover to the UN is a forerunner of an imminent total withdrawal.

Allied troops agreed to remain in northern Iraq until a deal had been reached on Kurdish autonomy and a Western strike force was ready in south east Turkey to respond to any Iraqi aggression.
But all the American, British, French and Dutch soldiers who had occupied Dohuk soon departed, leaving its population of about 180,000.
They were initially replaced by a dozen UN guards.
An Iraqi Kurd faction, the KDP, later took control of the area.