This Day in History | 1992 – South Africa votes for change 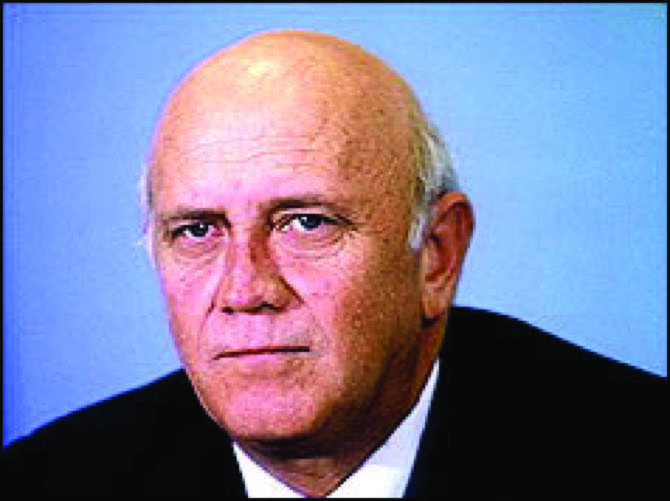 White South Africans have backed an overwhelming mandate for political reforms to end apartheid and create a power-sharing multi-racial government.

In a landslide victory for change, the government swept the polls in all four provinces, and all but one of 15 referendum regions.

The extent of change was highlighted in the Kroonstad region of the Orange Free State, where five of the seven Parliamentary seats are held by the “no” campaigners in the conservative party.

Despite being one of the most conservative districts in the whole country there was a small yes majority for change.

Only Pietersburg in the Northern Transvaal, a rural right-wing stronghold where Dr Andries Treurnicht has his parliamentary constituency as head of the CP, returned a no vote.

Pretoria, the administrative capital which has symbolised Afrikanerdom, produced a 57% “yes”, in the legislative capital, Cape Town, 85% voted “yes” and in the judicial capital of Bloemfontein 58.5%.

“Today we have closed the book on apartheid,’’ Mr de Klerk said in Cape Town as he also celebrates his 56th birthday.

White electors have not only voted by a 2-1 majority to abolish apartheid but also to lose their own power.

Mr de Klerk said the result was a boost for the Convention for a Democratic South Africa, Codesa, but he could not commit himself to a timetable for installing a multi-racial government, which required further discussions

Dr Treurnicht pledged never to work on the Codesa board and that CP would not join the negotiating forum.

He said: “De Klerk has won his referendum. That is clear.”

But he vowed there would be a return of apartheid in the country and he blamed media propaganda, foreign intervention and threats by businessmen against employees for the result.

Nelson Mandela, the president of the African National Congress who was jailed for 27 years because of his fight against black segregation, said he was ‘’very happy indeed’’.

The following year talks had led to the creation of an interim constitution and in 1994 South Africa’s first non-racial elections was won by the ANC and Nelson Mandela become president.

This brought with it a lifting of sanctions, restored membership of the Commonwealth along with South Africa retaking its seat in the UN General Assembly after an absence of 20 years.

Both Mr Mandela and Mr de Klerk won the 1993 Nobel Peace Prize for their very different but effective assaults on apartheid and the progress of South Africa.

In 1999, Mr Mandela stepped down as president.