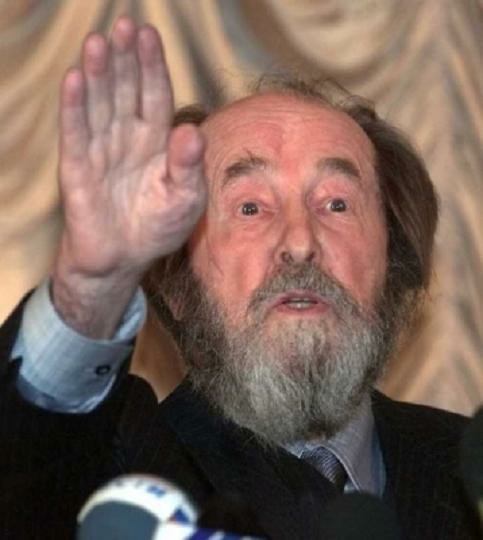 Alexander Solzhenitsyn has flown back to his native Russia after 20 years of exile in the United States.
His plane touched down in the far eastern port of Magadan from Anchorage, Alaska, and he was greeted by 2,000 people, given flowers and the traditional welcome gift of bread and salt.
The 75-year-old Nobel prize winner paid tribute to the millions of victims of Soviet repression.
“Today, in the heat of political change,” he said, “those millions of victims are too lightly forgotten, both by those who were touched by that annihilation and even more so by those who were responsible for it.
He arrived with his wife Natalya, aged 54, and the youngest of his three sons, Stephan, aged 20, along with a group of reporters documenting his historic journey.
He plans to travel right across Russia by train stopping off to meet ordinary people and catch up on 20 years of absence.
He should arrive in Moscow in about two months’ time, where a house is being built for him and his wife on the outskirts of the capital. The couple already own a flat in the city centre.
They have kept their house in Vermont for their sons who are American citizens.
Imprisoned by Stalin for a total of ten years for political dissent, Solzhenitsyn was stripped of his citizenship and expelled from the Soviet Union in 1974 for attacking the regime.
In 1990 Mikhail Gorbachev restored his citizenship and the following year dropped treason charges against him.
The Russia Solzhenitsyn is about to see may well have restored freedom of speech but it is plagued with economic problems, rising unemployment and organised crime.
In his comments over the past few weeks the writer has indicated he will play a moral and social role and not get involved with politics – but he has already criticised President Boris Yeltsin for allowing the country to become polluted by Western ways.
His return has received a mixed press in Russia. Nezavisimaya Gazeta called him “shamelessly outdated, with no understanding of Russia or the West”. The newspaper Izvestia was more charitable – “Whatever Solzhenitsyn’s political views,” wrote Konstantin Kedrov, “he is bigger than politics.”

Alexander Solzhenitsyn arrived in Moscow on 23 July after a two-month odyssey across Russia by train. He was met by about 1,000 people – a mix of admirers and protesters.
He expressed his shock at what he had seen on his journey, and attacked the leaders of the new Russia for betraying its people.
In December 1998, the author refused to accept a state award from President Boris Yeltsin to mark his 80th birthday.
He developed a more cordial relationship with President Vladimir Putin. In September 2000, the two men spent three hours together discussing Russia’s destiny.
He died in August 2008, at the age of 89.
Former Soviet leader Mikhail Gorbachev, whose reforms led to the end of communism in the country, said Solzhenitsyn played a key role in undermining Stalin’s totalitarian regime.
His works “changed the consciousness of millions of people”, Mr Gorbachev said.