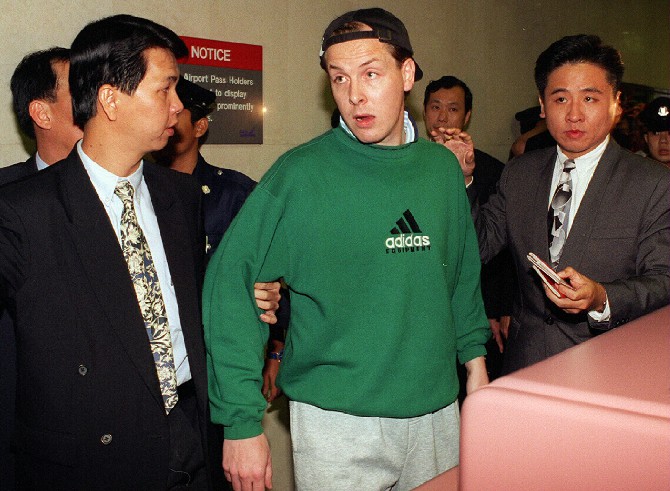 Former futures trader Nick Leeson has been jailed for six-and-a-half years for his part in the collapse of Britain’s oldest merchant bank.
The 28-year-old admitted to a judge in Singapore two charges of fraud connected with Barings Bank’s £860m ruin.
Judge Richard Magnus said Leeson had “spun a web of deceit” and created “a superficial reality designed to beguile” both Barings and the Singapore futures exchange.
He said Leeson, from Watford, Hertfordshire, had used his position as general manager of Barings future tradings operations in Singapore to “trade his honesty and integrity”.
“The facts speak of the criminal enterprise of the accused,” Judge Magnus said.
The court heard Leeson, whose wife Lisa was not in court, had bet Japan’s stock market would rise.
When it slumped after the Kobe earthquake he doubled his bets hoping to recoup his losses.
Every loss was hidden in a secret “error account” so his office would always appear in profit.
As the losses grew Leeson acquired extra funds by various means to continue trading.
His actions led Simex, Singapore International Monetary Exchange, to release money to Barings it should not have.
But by February, Barings’ bosses uncovered the losses as its cash reserves had been cleared out.
Leeson’s defence lawyer, John Koh, blamed London bosses for not curbing his client’s activities and said Leeson did not personally profit from the episode.
He was sentenced to six years for misreporting the status of around £300m in Barings contracts on 1 February.
He received another six months on forgery charge.
The sentence was backdated to March when Leeson was detained in Germany awaiting extradition to Singapore after he fled the country.
The authorities dropped nine other charges but they were considered during sentencing.
Leeson will pay £70,000 prosecution costs.

Nick Leeson is said to have exercised vigorously in prison and “found God”.
He served less than four years of his sentence and he wrote a book, Rogue Trader, which later became a film.
His wife Lisa took a job as an air stewardess to travel to him in jail but the couple later divorced.
Mr Leeson, who was treated for cancer after his release, studied for a degree in psychology at Middlesex University after his time in prison.
He is an occasional guest speaker at events.