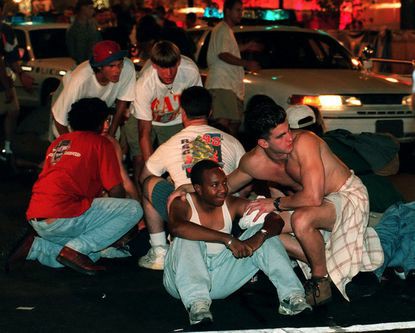 A bomb has exploded at a crowded concert in Atlanta, Georgia, the city hosting this year’s Olympic Games.
Two people are reported to have been killed and firefighting officials say as many as 200 people may have been injured.
The explosion happened at 0125 local time during a rock concert in the Centennial Olympic Park.
Three months ago, the Atlanta Olympic Committee transformed the 21-acre site from an unused area of slums and old warehouses into a popular entertainment venue.
It has attracted an estimated 100,000 people day and night who gather to hear music, watch concerts and contests on giant screens or buy souvenirs.
A band called Jack Mack and the Heart Attack had just finished playing a song when the bomb went off near a sound tower.
After the blast, the area was immediately surrounded by police and cordoned off.
The nearby press centre was closed because guards feared another explosion.
Eyewitnesses described a scene of chaos and carnage. People lay on the ground with head and other injuries as police tried to clear the area.
The police say they received a phone call warning of the bomb and describing its location but it was too late to evacuate the park. They did, however, manage to clear the immediate vicinity.
It is reported the caller’s voice had the characteristics of a white American male.
Security at the Games – already billed by the authorities as the largest peacetime security operation for a public event in American history – has been stepped up with extra bag searches and regular sweeps for explosives.
It seems most visitors are determined the attack will not stop them enjoying the Games and events such as boxing, diving and track and field attracted healthy numbers of spectators today.
President Bill Clinton has reacted defiantly saying the Olympic Games should carry on as planned to show the nation would not be cowed by acts of terrorism.
“An act of vicious terror like this is clearly directed at the spirit of our own democracy,” he said. “We must not let these attacks stop us from going forward. We cannot let terror win. That is not the American way.”
He made his comments during a White House news conference just two days after announcing strict new security measures at US airports following the crash of TW Flight 800. On 17 July just 45 minutes after it left New York’s Kennedy Airport the plane carrying 228 people exploded in mid air.

The pipe bomb at Atlanta killed two people and injured 111.
At first the FBI suspected the security guard who raised the alarm – Richard Jewell – but he was later cleared of any involvement.
Two years later Eric Rudolph was charged for the bombing in his absence after a Tennessee couple identified him as the man to whom they sold the smokeless powder, believed to have been used in the Atlanta device.
He became one of America’s 10 most wanted fugitives and was finally caught in May 2003 and brought to trial in July 2004.
He was also charged with three other bombings including that of an abortion clinic in Alabama.
In April 2005 he admitted to the crime as part of a plea bargain and was spared the death penalty, but received four life sentences without parole.