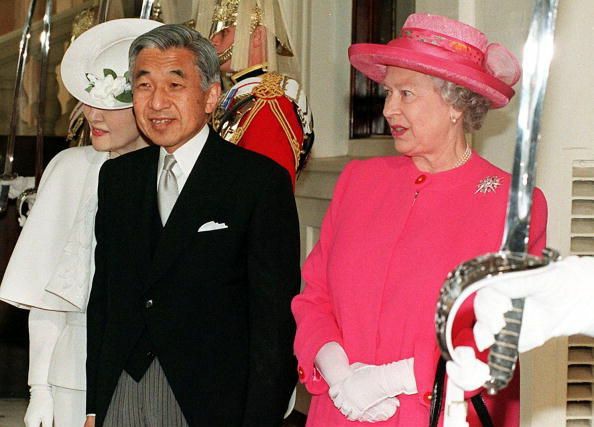 Emperor Akihito of Japan has spoken of his “deep sorrow and pain” over the suffering inflicted by his country during World War II, but did not apologise for the treatment of prisoners in work camps.
Addressing a state banquet at Buckingham Palace, attended by the Queen, Duke of Edinburgh, Queen Mother and 11 other senior Royals, the Emperor said he could “never forget” the many kinds of suffering experienced by so many.
War veterans said that Emperor Akihito had not gone far enough and demanded a “real, meaningful apology.”
They are angry with Japan over its refusal to offer more substantial compensation and a full apology for their suffering during the war.
Earlier, in a gesture of contempt, former prisoners of war turned their backs on Emperor Akihito and whistled the wartime anthem Colonel Bogey as he rode with the Queen in a Royal carriage down The Mall.
Later, outside nearby Westminster Abbey where the emperor laid a wreath at the Tomb of the Unknown Soldier, a memorial to the dead of World War I, around 500 protesters repeated their protest, turning their backs and humming Colonel Bogey again.
Under the post-war Japanese constitution, Emperor Akihito is a non-political figurehead and, as such, cannot formally apologise for the suffering inflicted by the Japanese imperial army.
But in the banquet speech on Tuesday, delivered in Japanese, he came close to saying sorry.
“It truly saddens me, however, that the relationship so nurtured between our two countries should have been marred by the Second World War.
“The Empress and I can never forget the many kinds of suffering so many people have undergone because of that war.
At the thought of the scars of war that they bear, our hearts are filled with deep sorrow and pain. All through our visit here, this thought will never leave our minds.
We sincerely hope that such a history will never be repeated between our two nations.”

Of the 50,016 British military personnel taken captive by the Japanese 12,433 died or were killed in captivity.
The survivors campaigned for years for extra compensation for the horrors they endured.
On 26 November 1998 a Japanese court ruled against them saying the issue was settled when Japan made a token payment of £76 (the equivalent of £1,200 today) to the servicemen in the early 1950s.
Two years later, the British government granted a total of £100m to 16,700 former PoWs or their widows “in recognition of the unique circumstances of their captivity”.
The chairman of the Japanese Labour Camp Survivors’ Association, Arthur Titherington, said the veterans would continue to seek a full apology from the Japanese emperor.