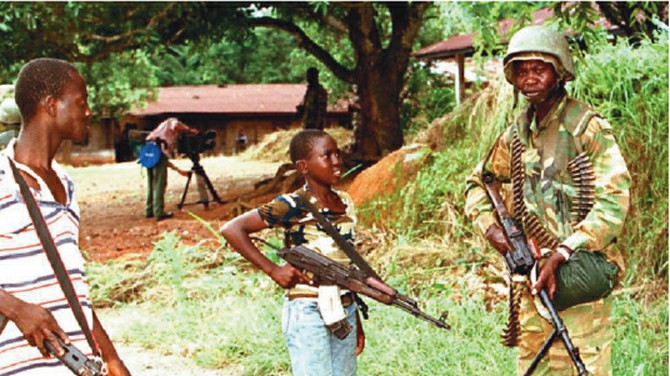 One British paratrooper has been killed and 11 injured during a bold mission to rescue six hostages being held in the Sierra Leonean jungle by a rebel group.
All the hostages are safe and aboard a Royal Fleet Auxiliary vessel moored in the country’s capital.
The captured soldiers – from the Royal Irish Regiment – were ambushed 16 days ago and were being held by the “West Side Boys” in a camp approximately 50 miles (80.5 km) from Freetown.
At least 20 of the rebels were killed in the attack which involved over 150 troops from the British army, including members of the Parachute Regiment and special forces.
The rescue began at 0630 local time (0730 BST) when British troops launched a simultaneous assault on the militia’s hide-out in Rochel Creek and on the nearby village Magbeni – also held by the rebels.
The hostages were freed within 20 minutes, but a fierce fire-fight with the West Side Boys continued for another hour.
Some of the rebels were captured, including their 24-year-old leader, Foday Kallay.
UK Prime Minister Tony Blair announced news of the rescue to reporters in Downing Street.
“This was an operation carried out in circumstances of immense danger in face of armed resistance,” he said.
He also praised the professionalism of the armed forces involved and confirmed there had been British casualties.
Britain’s High Commissioner in Sierra Leone, Alan Jones, said there was no choice but to use force.
He told reporters the negotiation strategy adopted by the West Side Boys indicated the captured soldiers were at extreme risk.
General Sir Charles Guthrie, the Chief of Defence Staff, said there had also been fears the hostages would be moved.
“We worked hard to find out exactly where they were being detained and we did not want to lose that and go back to square one,” he said.

UK forces were originally sent to the Sierra Leone to help with the evacuation of foreign nationals.
They were needed to bolster the UN peacekeeping force and Sierra Leonean army as rebel forces advanced on the capital of the former British colony.
The West Side Boys were a small but dangerous maverick group, and not connected to the country’s biggest rebel force – the Revolutionary United Front.
British soldiers remained in the country to help train the Sierra Leonean army. When this mission ended in September 2001 they withdrew leaving just a small force to act as military observers for the UN.