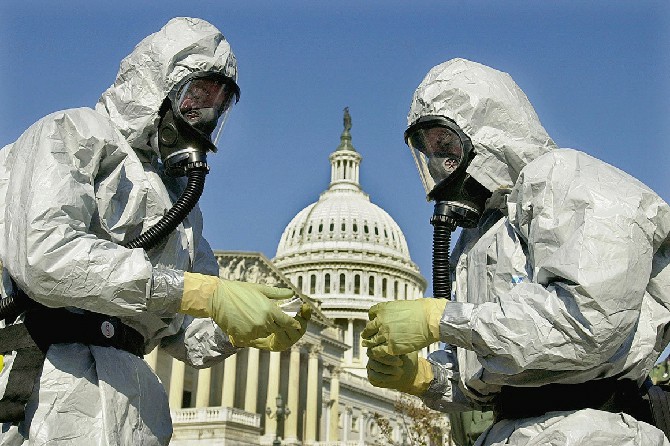 A third person has been diagnosed in the US with the most serious form of anthrax.
The unnamed Washington postal worker is being treated for inhalation anthrax but doctors expect him to make a full recovery.
This is the ninth confirmed case of anthrax in the United States since infected mail began turning up in Florida, Washington and New York following the 11 September attacks.
The only person to die from anthrax in this scare had the inhalation form of the disease but it was not caught as early.
The other victims have been infected through the skin, a less serious form of the disease.
The latest victim works at the Washington mail centre which processed an anthrax-tainted letter sent to Senate Majority leader Tom Daschle.
But it is not known whether he was exposed to the disease through this letter.
US Homeland Security Chief Tom Ridge said that the strain of anthrax used in the attacks on US media companies and the Senate appeared to be the same.
“We are obviously preparing for more,” he said.
Nearly 40 people in the United States, including 28 who work at the US Senate, have been exposed to anthrax bacteria in the past month.
Teams of hazardous material experts have been checking the House of Representatives after an anthrax-tainted letter was found in the Ford House Office Building mailroom.
The US is offering $1m for information on who is behind the anthrax attacks.
The US postal service is sending cards to every home and business – 147 million addresses – telling people how to deal with suspicious post.

There were a total of 18 cases of anthrax in the United States in 2001, five people died.
The offices of prominent politicians and media figures were among the targets.
All mail addressed to the US Government is now irradiated to kill anthrax.
Investigations in 2002 concluded the spores used in the 2001 attacks were less than two years old. This proved that the spores had been grown and could therefore be grown again.
It is not yet known who was behind the attacks. Original suggestions pointed to the al-Qaeda network as the attacks began shortly after the 11 September attacks but experts now believe it was the work of a lone man with a highly scientific background.