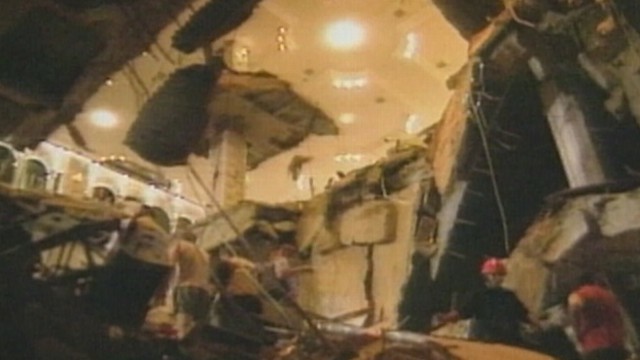 At least 20 people have been killed and hundreds have been injured at a wedding party in Jerusalem after the dance floor collapsed.
Guests were left clinging to the sides of the Versailles wedding hall when the third floor suddenly gave way at about 2245 local time and crashed through two storeys below.
There were nearly 700 guests in the building, which is in the industrial Talpiot area of Jerusalem. Many were left trapped by the falling rubble which left a gaping hole through the centre of the building.
Reports say about 250 people have been taken to hospital but rescuers say there are signs of life beneath the debris. A special Israeli army rescue unit is at the scene.
The father of the groom, Zion Dror, said: “We were dancing, and all of a sudden three storeys collapsed. My family is fine, thank God.”
The bride, Keren Dror, who was standing with the groom in the centre of a circle of dancers fell with him when the floor collapsed. She is reported to have injuries to her head and limbs and has been taken to hospital.
One wedding guest Efraim Rino told Israel Radio: “I grabbed my son as the floor collapsed. We fell one floor, and then the next floor collapsed. And the next. And I’m trying to hold my son’s hand all the time. He’s ten years old. We dropped all the way down. We were in the ruins. We had to be pulled out.
“People were flying through the air, the orchestra, the loudspeakers, everything fell.”
Jerusalem Mayor Ehud Olmert has already visited the scene and rejected suggestions of a terror attack.
There are some reports the Versailles banquet hall was built using a cheap method of construction, known as Pal-Kal, which was outlawed five years ago.
A caller to Israel’s Army Radio said he had organised a wedding at the hall a week ago and had called the owners afterwards to say he was worried about the state of the dance hall floor.

The final number of dead was 23.
Ten people were arrested by the Israeli authorities. They included the hall’s owners, the engineer who invented the Pal-Kal method of cheap and lightweight ceiling construction and contractors and builders involved with recent renovations.
An immediate safety check of all buildings using Pal-Kal was ordered. However, there were reports the checks were not thoroughly carried out and in the first six months after the disaster only one building, Lev Hagiva, was partly closed.
Seven weeks after the banquet hall collapse families of the victims won their battle to have the tragedy declared a national disaster, so they could be entitled to compensation from the state.
In December 2003 a report into the Versailles wedding hall disaster found it a “miracle” there had been no other collapses given the lack of action taken on sub-standard buildings.
In October 2004 two of the owners of the hall were convicted of causing death through negligence. Two other employees were acquitted.