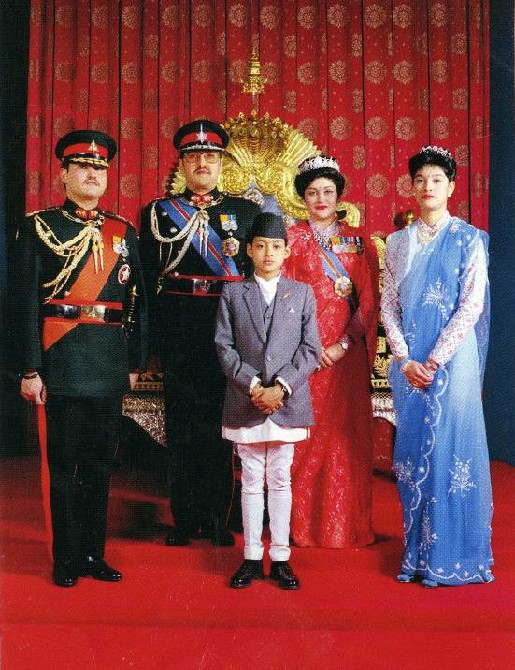 The King and Queen of Nepal have been shot dead after the heir to the throne went on the rampage with a gun before turning it on himself.
Eleven people died in the incident which started when Crown Prince Dipendra allegedly had a dispute with his mother over his choice of bride.
King Birendra, Queen Aishwarya and Prince Niranjan were among the victims of the tragedy at the royal palace in Nepal’s capital, Kathmandu.
The other victims included three of the King’s children, his two sisters and one more member of the family by marriage.
The King’s younger brother was also hurt in the attack, but his condition is not known.
The only person left unharmed from the family was the King’s middle brother Prince Gyanendra, who was out of the country at the time of the incident.
Some reports say the Crown Prince is on a life support machine in hospital.
If he lives, he is expected to be declared the successor.
Crown Prince Dipendra, who was educated at Eton College, is reported to have been in conflict with his family over his choice of bride, Devyani Rana, for some time.
Queen Aishwarya is said to have been the real power behind the throne and allegedly threatened to remove her oldest son from the line of succession, although this would not have been allowed under the constitution.
The murders are thought to be the worst mass killing of royalty since the Romanovs were put to death in 1918 during the Russian Revolution.
“This is a most unfortunate and shocking event,” said Deputy Prime Minister Ram Chandra Paudel.
“Shocking is an understatement, we have been orphaned by this loss,” said a vegetable seller, Janardan Sharma, who like many in Kathmandu rushed to the royal palace to try to find out more news of the tragedy.
Kofi Annan, Secretary General of the UN, issued a statement saying that he was “profoundly shocked” by the killings of King Birendra and other members of his family.
He called for calm in the country and said that he was “deeply saddened by this tragedy”.
King Birendra, 55, ascended the throne in 1972.
When nationwide unrest broke out in 1990 he was forced to legalise political parties and accept a parliamentary system.
He was the last ruling Hindu monarch.

It was later confirmed Crown Prince Dipendra had turned the gun on himself but did not die immediately and lapsed into a coma.
He died some 30 hours after the shootings when the king’s middle brother, Prince Gyanendra was declared the new king.
Devyani Rana fled Nepal and is reported to be in Europe.
Riots followed the killings as conspiracy theories about coups flourished.
Prince Paras Shah, who had suddenly become second in line to the throne as son of the new king, was blamed for the tragedy as people refused to believe Dipendra could have killed his parents.
Two leading Maoists also tried to blame India for conspiring with the Nepali government to undermine the sovereignty.
There followed an upsurge in violence led by the Maoist rebels which led to a state of emergency in November 2001.
A seven-month truce failed in August 2003 and two years later the king imposed direct rule saying the government had failed to defeat the Maoists.
In April 2006 an alliance of seven opposition parties organised national strikes and protests which led to a violent crackdown by the police. The UN human rights commissioner in Nepal urged the king to restore democracy and prevent further bloodshed.
The following month, the Nepalese government approved a plan to curtail the king’s powers, oblige the royal family to pay tax and hand over control of the army to parliament which will also name the king’s heir.