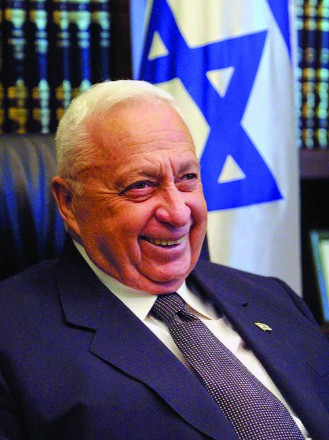 The leader of the right-wing Likud party, Ariel Sharon, has won a landslide victory to become the new prime minister of Israel.
He called for a government of national unity to bring peace to the Middle East.
The outgoing prime minister, Ehud Barak, said he was resigning as Labour leader and leaving parliament.
Addressing jubilant supporters in Tel Aviv, Mr Sharon ruled out territorial concessions to the Palestinians over Jerusalem and urged them to “cast off the path of violence and return to the path of dialogue”.
He said: “Today the state of Israel has taken a new road, the road of peace, security and unity.”
Mr Barak ruled out his party’s participation in a national unity government without agreement on a joint plan of action.
“Friends, we have lost a battle, but we will win the war,” he told supporters. “Our path is the one and only path, the path that will lead Israel to peace and security.”
Mr Sharon has a fearsome reputation as a ruthless and fearless soldier and politician. As defence minister he was the main architect of Israel’s invasion of Lebanon in 1982.
He was removed from office in 1983 by an Israeli tribunal that found him indirectly responsible for the massacre of hundreds of Palestinians by Lebanese Christian militiamen in two Beirut refugee camps under Israeli control.
But he made his political comeback just one year later as trade and industry minister in a Likud-Labour national unity government.
Minutes after voting ended on Tuesday evening, exit polls gave Mr Sharon a lead of 19%. Partial results broadcast later on Israeli television suggested an even greater lead for the Likud leader.
Turnout, according to electoral officials, was about 60% – the lowest in Israeli history.
Palestinian leader Yasser Arafat was conciliatory in his response to Mr Sharon’s victory.
“We respect the decision of the Israeli people,” Mr Arafat said. “We hope the peace process will continue.”
But his comments came after Palestinians had held what they called a “day of rage” to coincide with the voting and Mr Sharon’s expected victory.
Demonstrators chanting ‘’Sharon is a butcher’’ clashed with Israeli soldiers in the West Bank towns of Ramallah and Hebron.
Mr Sharon will inherit the same fractured and fractious parliament which gave Mr Barak so much trouble.
Some Israeli commentators say there may have to be new parliamentary elections within six months.
In that event, his rival Binyamin Netanyahu could challenge him for leadership of the Likud Party and supplant him as prime minister.
The new Israeli prime minister may also find himself constrained by the realities on the ground.
If he tries, as his record suggests he may, to use the iron fist to curb Palestinian anger, analysts say he will find there are no purely military solutions to the Israeli-Palestinian problem.

In June 2002 following a series of suicide bombings, work began on building a security wall, 640 km (440 miles) long, between Israel and the West Bank.
An effort to revive the peace process resulted in the publication of a new roadmap for peace in April 2003.
Ariel Sharon’s mission was to fight for Israel’s security, in the belief that the end justifies the means.
But his plans for Israeli settlers to withdraw from the Gaza Strip and parts of the West Bank – completed in August 2005 – provoked ire from his staunchest supporters and were repeatedly voted down by his right-wing Likud Party.
He finally left Likud in November 2005 to found a new centrist party, Kadima (Forward).
On 4 January 2006, Mr Sharon suffered a major stroke and went into a coma.
Three months later, on 11 April, the Israeli cabinet declared him “permanently incapacitated”.
Ehud Olmert was then promoted from acting PM to the full premiership having secured a victory for Kadima in elections held the previous month.