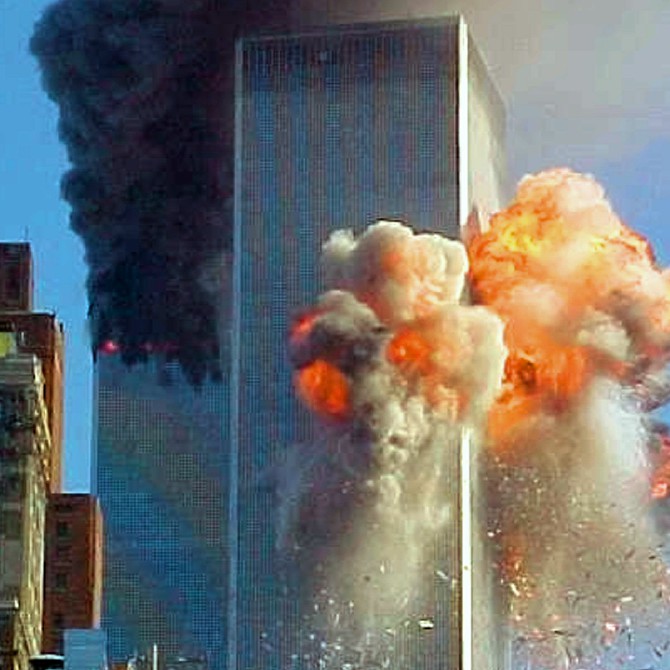 The United States is in a state of shock after a day of attacks which have left thousands dead and New York’s World Trade Center destroyed.
The Pentagon was also severely damaged by one of the three civilian airliners which hijackers turned into flying bombs. A fourth plane crashed in a field near Pittsburgh.
A state of emergency has been declared in Washington D.C. and the US has closed its airspace and its borders with Mexico and Canada.
American forces are on one of their highest states of alert and the Pentagon has deployed a naval battle group off the country’s east coast to bolster air defences.
American Airlines Flight 11 was hijacked at 0825 Eastern Daylight Time (1225 GMT) and 18 minutes later crashed into the north tower of the World Trade Center.
United Airlines Flight 175 – which had been hijacked within minutes of the first plane – was flown into the south tower at 0903 EDT (1303 GMT) causing another devastating explosion.
The second crash was captured live on news cameras trained on the burning north tower.
At 0940 EDT (1340 GMT) a third hijacked airliner – American Airlines Flight 77 – was flown into the side of the Pentagon in Washington.
An hour after the Boeing 767 slammed into the south tower of the World Trade Center the 110-storey building collapsed.
The north tower followed minutes later, compounding the destruction and loss of life.
Witnesses reported seeing people jumping from the towers just before they collapsed.
President Bush was reading to pupils at a Florida school when his chief of staff whispered news of the attacks to him.
He was flown to the US Strategic Command Centre at Nebraska – where the country’s nuclear weapons are controlled – but is now on his way back to Washington.
He is expected to address the nation later this evening.
New York mayor Rudy Giuliani said the final number of dead may be “more than any of us can bear”.

The final number of people killed in the suicide attacks on 11 September was about 3,000.
It took almost nine months to clear the millions of tons of rubble at “Ground Zero” where the World Trade Center had stood.
The biggest criminal investigation in history quickly identified the hijackers, and linked them to al-Qaeda – the Islamic militant group set up by Osama Bin Laden.
President Bush declared a worldwide war on terror, and on 8 October the United States and Britain hit targets in Afghanistan, where Bin Laden was believed to be hiding.
The regime in Afghanistan fell quickly in the face of American military might, but Osama Bin Laden remained at large for years.
President Bush extended his global campaign against terror to Iraq in March 2003, when a coalition dominated by US and UK forces invaded.
Already under the Barack Obama administration, Osama bin Laden was killed in Abbottabad, Pakistan, on May 2, 2011 by a US military special operations unit.