This day in history | 2003 Conjoined twins die in separation op 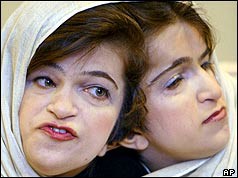 Conjoined Iranian twins who volunteered to go ahead with a major operation to separate them have both died during surgery.
Laleh and Ladan Bijani suffered a fatal loss of blood within a couple of hours of each other as surgeons tried to separate their brains.
During the marathon three-day operation it became clear that the brains of the 29-year-old sisters had become fused together.
Surgeons spent about 21 hours cutting the twins’ brains apart “literally millimetre by millimetre” – something they had not expected to have to do.
The two women were separated after 53 hours, but half an hour later, Ladan’s circulation began to fail. Despite the efforts of the team of 28 doctors and 100 medical assistants, she died.
Surgery continued on Laleh but her circulation also dropped away, and she died 90 minutes later.
The chairman of Raffles Hospital, Dr Loo Choon Yong, said, “When we undertook this challenge we knew the risks were great, and one of the scenarios was that we might lose both of them.
“Ladan and Laleh knew that too.”
The twins were told they only had a 50-50 chance of surviving the operation, but decided to go ahead anyway.
The operation marked the first time surgeons had tried to separate adult twins conjoined at the head.
The operation has been successfully performed since 1952, but only on children, who recover more easily.
German doctors had already turned away the twins in 1996, saying the operation would be too risky.
Both Bijani twins were national figures in Iran for their courage and academic success – both graduated after studying law.
One of their last acts was to send a message of thanks to well-wishers, published on the Raffles Hospital website.
“Both of us have started on this journey together,” they wrote, “and we hope that the operation will finally bring us to the end of this difficult path and that we may begin our new and wonderful lives as two separate persons.”

Ladan and Laleh Bijani were buried in separate graves in their home village four days later.
Hundreds of people paid their respects, and there was widespread mourning in Iran and in Singapore.
The death of the twins triggered a debate on the ethics of this type of operation, with some experts voicing concern over the motives behind such risky surgery.
On 6 March 2004 an inquest in Singapore cleared doctors of criminal responsibility, and returned a verdict of misadventure.
In October 2003, a similar operation was carried out in Texas on two-year-old Egyptian twins Mohamed and Ahmed Ibrahim.
Like the Bijani sisters, they were joined at the head, but their operation was successful.
They left hospital in March 2004, although they will have to return for reconstructive surgery for some years to come.