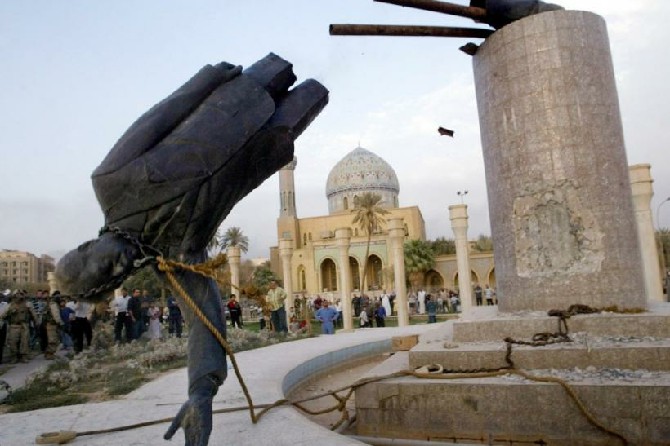 There have been scenes of jubilation in Baghdad as US tanks rolled into the very heart of the Iraqi capital, confirming that the government of Saddam Hussein has been ousted from power.
In the main square in Baghdad, a group of Iraqi men attempted to pull down a massive statue of Saddam Hussein in an unprecedented show of contempt for the Iraqi leader.
The metal plaque at the base of the statue was torn off and the statue’s marble plinth attacked with a sledgehammer.
The men scaled the statue to secure a noose around its neck but were unable to pull it down.
Then US troops joined in, and used an armoured vehicle to gradually pull down the statue.
The extraordinary scenes were watched by millions across the world live on television.
The square is opposite the Palestine Hotel, used as a base by the world’s media during the war in Iraq.
A little before the statue came down, a US soldier climbed up and draped the face with a US flag.
The crowd did not welcome the move, seeing it as a step too far towards American triumphalism, and the flag was quickly removed.
A few minutes later, it was replaced by the old Iraqi flag, to roars of approval.
As the statue fell to the ground at last, the crowd surged forward and jumped on it.
Chanting and jeering, they danced on the fallen effigy, kicking it and hitting it with their shoes in a symbolic gesture of contempt as it was torn to pieces.
They then severed the head, tied chains around it, and dragged it through the streets.
As news of the events in the square spread, more and more Iraqis gathered to watch, with women and children joining the crowds of men.
There were similar scenes across the capital, as the many hundreds of statues and pictures of Saddam Hussein that came to symbolise his regime were attacked and torn down.
The military campaign will continue, although the US Army has delivered its most upbeat assessment yet of the gains it is making in Iraq.
“Much of Iraq is free from years of repression,” said Brigadier-General Vincent Brooks, the US Central Command spokesman in Qatar.
“With every day that passes, we are breaking the grip of the regime.”

The toppling of Saddam Hussein’s statue became one of the enduring images of the war in Iraq. Although there has since been some speculation that it was staged by US forces.
One BBC correspondent, who was in Paradise Square and watched the statue being pulled down, said his impression was of “a newly free people” expressing their “overwhelming joy”.
US troops continued to advance north for another week, taking key towns such as Saddam Hussein’s home town of Tikrit, before President Bush declared victory on 1 May.
The honeymoon period for US troops was short.
In the power vacuum which followed the collapse of Saddam Hussein’s regime, law and order broke down and US troops became targets for many Iraqis resentful of the continuing occupation.
In the six months after the war ended, more US soldiers died in guerrilla attacks and suicide bombings than during the whole of the war.
Saddam Hussein himself was captured in December 2003.He was tried by and Iraqi court, sentenced to death and was hanged on 30 December 2006.