This day in history | 2003 The Terminator takes on California 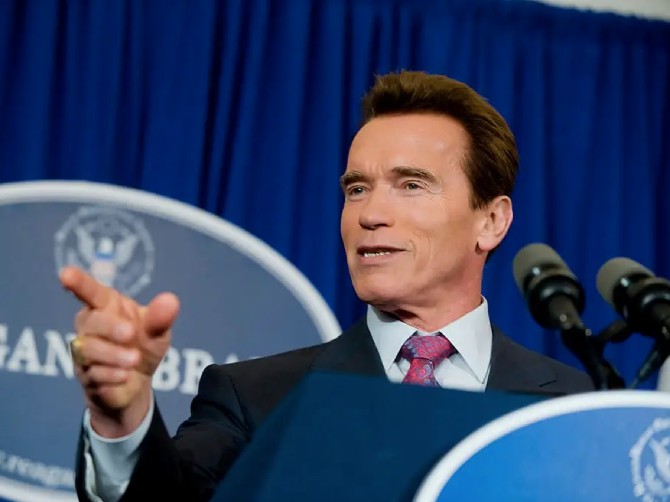 The film star Arnold Schwarzenegger has been elected governor of California, ousting the incumbent, Gray Davis, three years before his term was due to end.
It is the first time in the state’s history that a governor has been sacked mid-term.
With most of the ballots counted, Mr Schwarzenegger has won almost 48% of the vote.
In a victory speech before jubilant supporters, Mr Schwarzenegger thanked the people of California for giving him their trust.
“I want to be the governor of the people,” he said. “I know that together we can make this the greatest state in the greatest country in the world.”
He pledged to restore trust in California’s government and to re-impose discipline on the state’s out-of-control budget.
Gray Davis has already accepted defeat, telling supporters voters had decided “it was time for someone else to serve and I have accepted their judgement.”
The vote was triggered by Republican activists, frustrated at high levels of unemployment, struggling schools, and the state’s budget deficit, which now runs into tens of billions of dollars.
In a two-part ballot, voters were first asked if they wanted to recall – or sack – Governor Davis.
The only other governor in US history to be recalled was North Dakota’s Lynn Frazier, in 1921.
Then – regardless of their answer to the first question – they had to indicate who they preferred as an alternative among the 135 alternative candidates running.
With 96.8% of the results in, 54.4% wanted a recall.
Mr Schwarzenegger was running ahead with 47.9% support. His closest rival, Lieutenant Governor Cruz Bustamante, was on 32.4%.
The Austrian-born film star and former body builder – who made his name in action films such as The Terminator and Total Recall – galvanised the campaign when he announced he would be running on talk show host Jay Leno’s television show earlier this year.
Large crowds have gathered to see him at campaign speeches and rallies.
But the political fight has been brutal at times, with Mr Schwarzenegger accused of sexually harassing a number of women, and allegations that he once praised Hitler.
He has denied the allegations, although he made an apology for “rowdy behaviour” on film sets.

The final result was 55.4% in favour of a recall, with 44.6% opposing it.
Arnold Schwarzenegger won a decisive victory with 48.7% support, 16% ahead of his nearest rival.
He was sworn in as Governor of California on 17 November 2003.
His first act was to abolish an unpopular car tax rise imposed by Governor Davis. He also formally ruled out tax rises – one of the big question marks overhanging his campaign.
Later policies, however, have caused controversy.
In February 2004 he ordered his top legal official to act against the city of San Francisco for allowing gay marriages in defiance of state law, saying they represented “an imminent risk to civil order”.
After weeks of wrangling with senators, Governor Schwarzenegger secured a last-ditch agreement on California’s $103bn (£56bn) budget in July 2004.
The budget neither raised taxes, nor cut spending too deeply, instead committing the state to borrowing heavily to keep its finances on track.
Some economists have warned the policy only postpones – and could exacerbate – the state’s economic problems.