Thriller Live kicks off at the Parisian Theatre 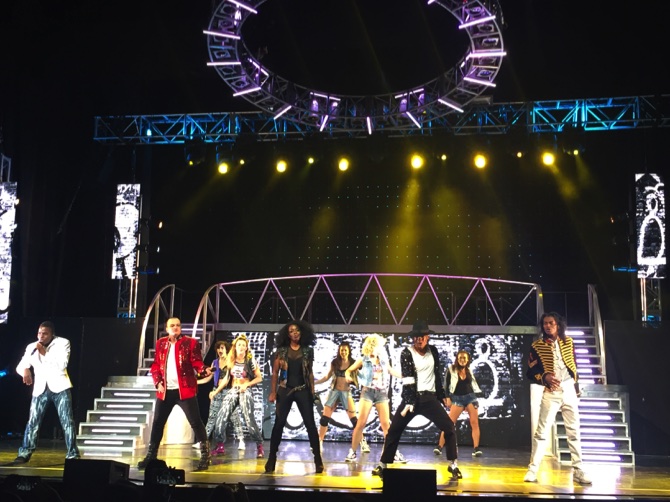 Thriller Live, the theatrical concert that celebrates arguably the world’s greatest entertainer ever, Michael Jackson, held its debut performance at The Parisian Macao’s new Parisian Theatre, on Friday.
The tour company has brought everything directly from London’s West End to Macau: 40 people on the road, 20 people on stage and 300 costumes prepared for the performers. During a backstage media visit last week, the tour director explained that the show’s music is entirely live. The music is performed by six musicians who work behind the stage.
The show will be playing in the city until November 13 at the Parisian Theatre.
Among the performers, one of the cast leads is Cleo Higgins. As told by Higgins, this is her first time doing a live show in Asia. “Of course, I am excited,” she said, adding that travelling to Macau has been an exciting and enjoyable trip.
According to Higgins, Macau is the second place in Asia where the group performs. “We travelled pretty much everywhere around the world, but the only place that we managed to touch in Asia was Japan,” she noted.
When asked about the reason that inspired her to join the show, Higgins mentioned Michael Jackson. “To be fair, I have done this job because Michael Jackson is my biggest inspiration,” she said, adding that Michael Jackson’s music really grew on her.
This might be the last stop for Higgins on the Thriller Live tour. “I am ready to kind of, stop now. So Macau is my last stop on Thriller,” she announced.
Higgins was the lead singer of the 90s R&B pop sensation group Cleopatra, who had five hit singles in the UK.
Phil Watts, tour manager of the Thriller Live, said that the artists are trying to give the audience the same experience they might have had during one of Michael Jackson’s concerts. “We try to keep it from not being a tribute show,” said Watts. “What we try to do is to show people how multi-talented Michael Jackson was, what a fantastic singer and dancer he was.”
According to Watts, the show here in Macau is a faithful and complete replica of what could be seen in the back stage of the West End.
Thriller Live features Jackson’s timeless songs and signature dance moves, and it has been performed more than 5,000 times and seen by four million people in more than 30 countries around the world. Julie Zhu