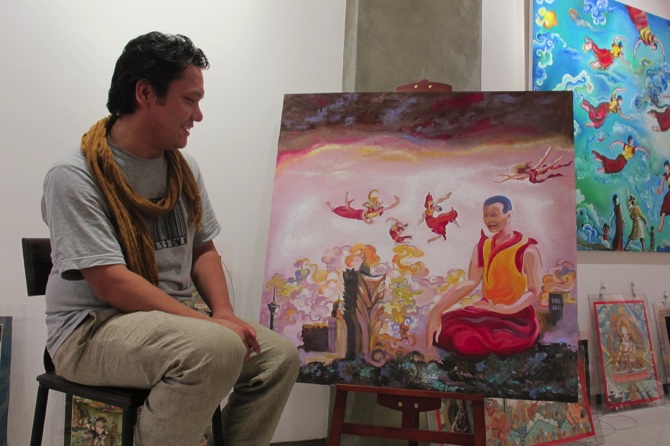 A Tibetan artist who was due to perform a live painting session during the Lilau Square events yesterday has allegedly been barred from entering the Macau SAR.

Tashi Norbu was allegedly refused entry to Macau and “left in limbo” in Hong Kong, preventing him from attending the organized painting of “Fire Rooster” – the painting’s title and the year’s symbol for both the Chinese and Tibetan calendars.

The painter – who is of Tibetan descent, though a Belgian national living in the Netherlands – had been allowed to attend an event at the iAOHiN Gallery in April last year, where his artwork was exhibited as part of the “Tibet Revealed” exhibition.

According to a statement issued by iAOHiN curator Simon Lam, Tashi said: “I was planning to show my art, a language and medium I have studied for my whole life. […] It is sad that I am banned to be present and perform my art and skills in Macau.”

According to Lam, Tashi was also detained for about an hour while leaving and entering Macau last year, while this was not the case in Hong Kong.

The Public Security Police Force (PSP) has declined to provide details on the decision, citing privacy concerns. A PSP representative further stated that there is no list regulating who may or may not enter the territory, implying that immigration officials made the decision independently.

“The police cannot confirm any particular case given the privacy law. In all cases, it acts according to the law. Law 4/2003/Article 4 lists the reasons why a person might be denied entry,” noted the PSP in reply to an enquiry from the Times.

According to the law, non-residents of the MSAR can be refused entry if they have been previously sentenced or if there is a “strong indication” that are prepared to commit a crime, or if there are doubts about their intent to return, their subsistence during their stay or the authenticity of their travel document.

Tashi was not refused entry to Hong Kong where, according to the latest information, he is currently staying.

The PSP said that the person in question would have been issued with a statement explaining the decision of immigration, as is standard procedure.

According to the statement issued by Lam, “no specific reason was given for the denial of entry to Macau, but Norbu acknowledged that he might be considered a controversial painter by Beijing.” He has previously painted burning Tibetan monks and spiritual scenes with the Dalai Lama and Tibetans in exile.

“I am personally very disappointed with authorities’ attitude to art and seeing it as a threat, banning what is nothing else than pure art performance,” stated Lam. “Censorship is simply wrong, and in this case it simply cannot be justified as Tashi has been allowed to perform in Hong Kong last week without any problems.”

Representatives of cultural authorities in Macau usually attend large-scale or international exhibitions in Macau, in line with the government’s objective of promoting culture as an economic alternative to gaming.

Last year’s exhibition at iAOHiN was noticeably absent of government representation, possibly due to some of the controversial artworks on show.

The most controversial of the works on display was by Australia-based Tibetan exile Karma Phuntsok, which appeared to depict the Chinese military crackdown during the Lhasa Uprising in 1952. Karma did not attend the exhibition.

The Times interviewed Tashi last year, learning of his unique artistic style that blends traditional, religious Tibetan artwork with contemporary “mainstream” icons. In honor of his visit last year, Tashi brought with him an unfinished painting including portrayals of the Grand Lisboa casino and the Macau Tower.