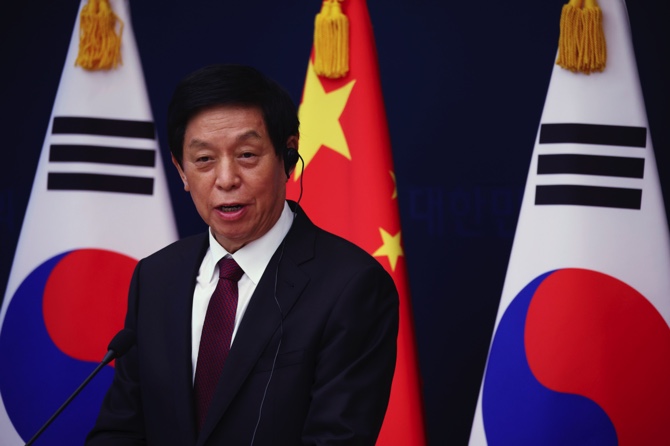 The head of China’s legislature called for cooperation with South Korea in advanced technology and supply chains, as he met South Korean leaders Friday amid concerns that their moves to solidify a military alliance with Washington could hamper Seoul’s ties with Beijing.

Li Zhanshu, third in the Chinese Communist Party hierarchy and one of President Xi Jinping’s closest confidants, is the highest-level Chinese official to visit South Korea since his predecessor did so in 2015. His trip is seen as part of efforts by Beijing to boost ties with neighboring countries ahead of a Communist Party congress next month that will likely grant Xi a third five-year term as leader.

Li’s visit is also crucial for South Korea’s government, which wants to assure Beijing that its push to strengthen its alliance with the U.S. and participate in U.S.-led regional initiatives won’t target China, its biggest trading partner.

Earlier this month, Li visited Russia, where he decried international sanctions against Moscow, underscoring Beijing support for Russia in its war on Ukraine despite claims of neutrality. On Thursday, Xi met Russian President Vladimir Putin on the sidelines of a regional gathering in Uzbekistan. Putin thanked Xi for his “balanced” approach to the Ukrainian crisis and blasted Washington’s “ugly” policies.

Li’s talks with Yoon have drawn keen attention because Yoon last month skipped an in-person meeting with U.S. House Speaker Nancy Pelosi, who visited Seoul after a trip to Taiwan that angered China, which claims the self-ruled island as its territory. Yoon, who was on vacation, spoke by phone with Pelosi but faced domestic criticism that he had intentionally shunned her so as not to provoke China. Yoon was the only head of government who didn’t meet Pelosi face-to-face during her Asian trip, which also included Singapore, Malaysia and Japan.

Kim Heung-kyu, director of the U.S.-China Policy Institute at Ajou University in South Korea, said Li’s visit is different from Pelosi’s because she arrived after her contentious Taiwan trip. But he said China would still likely see symbolic significance in Li meeting with a South Korean president whom Pelosi failed to meet.

Some worry that Yoon’s tilt toward Washington could trigger economic retaliation by China, as it did in 2017 when South Korea allowed the United States to base a Terminal High-Altitude Area Defense radar system, or THAAD, on its soil. China, which says the radar can spy on its territory, suspended group tours to South Korea and conducted an unofficial boycott of South Korean products.

During their meeting, Yoon said the THAAD issue must not be a sticking point in bilateral ties, and Li agreed on the need for close coordination to resolve sensitive issues, according to Yoon’s office.

China is likely to be more cautious about launching another economic retaliation because it would push South Korea closer to the United States and worsen anti-Chinese sentiment in South Korea, according to Professor Kim Han-kwon of the Korea National Diplomatic Academy.

“In the case of the THAAD dispute, China shook public opinion in South Korea and caused South Korea to suffer economic losses,” he said. “But eventually, they failed to get THAAD scrapped and anti-China sentiment grew in South Korea. There was also a public reevaluation of a boosting of the South Korea-U.S. alliance and of South Korea-U.S.-Japan security cooperation.”