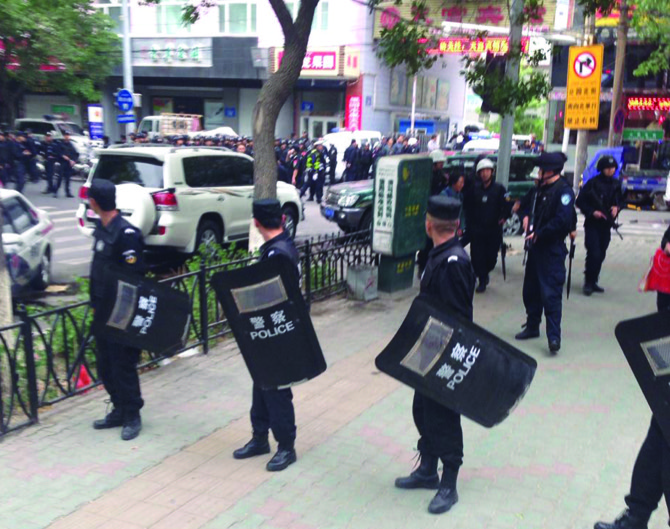 In this 2014 photo, police officers stand guard near a blast scene in downtown Urumqi

China’s foreign minister defended a security crackdown effecting one of the country’s largest Muslim minorities as a necessary response to terrorism, in Beijing’s highest-level response yet to reports of mass internment camps.

Foreign Minister Wang Yi told reporters yesterday that conditions in the remote western region of Xinjiang were a “domestic issue” and cautioned foreigners against believing “gossip and hearsay” about the situation. Wang was asked about the reports during a visit to Beijing by German counterpart Heiko Maas.

The remarks represent the ruling Communist Party’s latest effort to explain the mass detentions, which have become its biggest source of criticism from Western governments and human rights advocates.

Academic estimates, which have been described as credible by the United Nations officials, suggest that authorities are holding as many as many as 1 million ethnic Uighurs and Kazakhs in “transformation through education” camps — or roughly 10 percent of their population in the province.

Wang said China’s security efforts in Xinjiang “are in line with those by the international communities, and the focus is on prevention.” “If you do well in prevention, terrorism won’t have a chance of spreading and taking root. That’s the most effective way of fighting against terrorism,” he said.

Wang called on outsiders to view the situation “objectively.” “We hope journalist friends and friends from other countries will pay attention to official information from China’s government,” he said.

It was the second time this year that a German visit prompted China to address human rights concerns. A reporter’s question during Chancellor Angela Merkel’s trip in May caused Chinese Premier Li Keqiang to defend his country’s record on the issue. Two months later, the country’s diplomatic push was credited with securing the release of Nobel Peace Prize laureate Liu Xiaobo’s widow Bloomberg