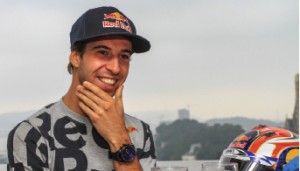 Infiniti Red Bull Racing driver Daniel Ricciardo sees Macau as “the ultimate street circuit.” António Félix da Costa, another Infiniti Red Bull driver who won the Grand Prix in 2012, likewise says, “it’s the best circuit in the world.”
“Just hearing the name gets me excited. I love street circuits and Macau is the ultimate street circuit. It’s big, it’s ballsy. It’s Monaco but twice the length and even crazier. I like that a lot. It’s good fun,” said Ricciardo.
In an article published on the Red Bull website, the driver said that commitment is crucial for a successful Grand Prix weekend. Ricciardo thinks street circuits do not reward over-driving, because there’s a risk of crashing. “But you need to be committed. Basically it just requires balls,” he added.
Ricciardo competed during the 2009 Macau Grand Prix. He arrived as the Champion of British F3, but his race ended on the first lap with a puncture that led to a red flag.
“It always creates crashes because we’re always hot-headed. I was young, dumb, and full of… energy. I would love to go back there now with a bit more knowledge. It would be so much fun,” he said.
Félix da Costa, current Infiniti Red Bull Racing reserve driver, won the Macau Grand Prix in 2012 and finished second last year. He thinks this “is the best circuit in the world.”
“It’s the best combination of car and circuit. The Formula 3 car just fits perfectly to that racetrack. I was a very happy boy when I was racing there,” he added.
He recalled how crashing meant a “huge step backwards for the rest of the weekend,” as one would be permanently playing catch-up and seeking a good lap.
Daniel Ricciardo also said he wants to race on Macau’s circuit again. “I have to. I have to drive that circuit again. Once is not enough.”
This year Max Verstappen,  a member of the Red Bull Junior program, will take to the circuit. He’s hoping to end his short junior category career “on the highest of high notes.”